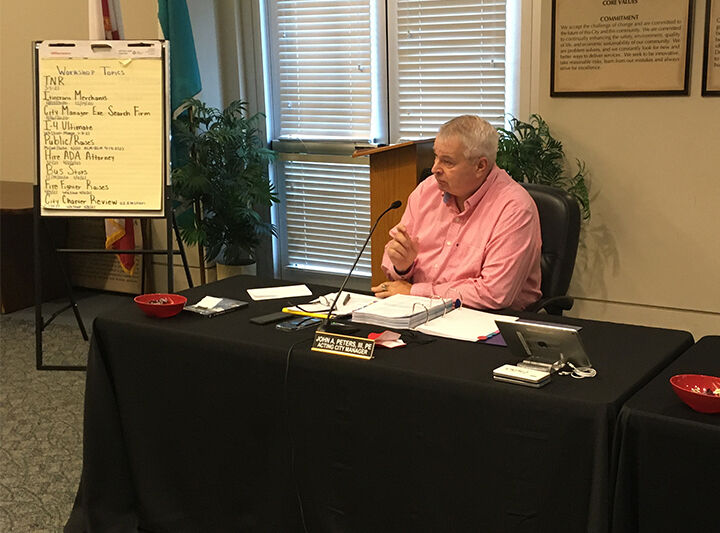 This story has been updated with comments from Deltona Mayor Heidi Herzberg.

For the third time in less than a year and a half, an abrupt change in Deltona’s civic leadership is unfolding.

“I don’t have a choice,” Peters told The Beacon. “There’s too much interference. If I resign, I can speak out about it.”

Interference, he explained, is coming from city commissioners who oppose his measures on code enforcement and personnel.

“That’s a breach of the charter,” Peters added.

Indeed, Section 5, Paragraph 11 of Deltona’s charter sets out the separation of powers, prohibiting city commissioners from interfering with city employees doing their jobs, or risk being guilty of malfeasance.

“NONINTERFERENCE BY CITY COMMISSION. Except for the purpose of inquiry and information, the Commission and its members, including committees thereof, are expressly prohibited from interfering with the performance of the duties of any City employee who is under the direct or indirect supervision of the City Manager or City Attorney. Such action shall be malfeasance within the meaning of Florida Statutes.”

Peters tendered his resignation May 25. His letter of resignation takes the form of a memorandum for an item to be placed on the agenda of the City Commission’s June 7 meeting. That is the next regular meeting of Deltona’s governing body.

“No, he’s made it very clear he wants to wait for June 7, she said. “And maybe then, commissioners will decide to keep him until the end of the year, and maybe stay out of his way.”

She said, “They can’t seem to get out of their own way.”

In his letter, Peters writes in the third person and presents three options with dates for acting on his intention to leave the post he was appointed to last fall.

— Accept Mr. Peters’ resignation effective upon completion of the draft city budget in mid-August and designate an interim city manager at that time; or

— Accept Mr. Peters’ resignation, effective Dec. 31, to allow the City Commission time to complete a search for a city manager.

Peters’ decision to exit Deltona’s top administrative post follows favorable career evaluations from members of the City Commission, and the commission’s decision May 3 to grant him a $2,500 increase in his annual salary.

The City Commission, in a surprise move, turned to Peters — who had been director of public works — to replace Acting City Manager Dr. Marc-Antonie Cooper when Cooper resigned in February.

Peters’ base salary as acting city manager was $165,000 a year. The commission had demoted Cooper for allegedly failing to keep them fully informed about matters at City Hall.

Cooper became acting city manager of Deltona in January 2020, following the exit of Jane Shang. Shang resigned after the commission voted “no confidence” in her. She had served as Deltona’s city manager since 2015.