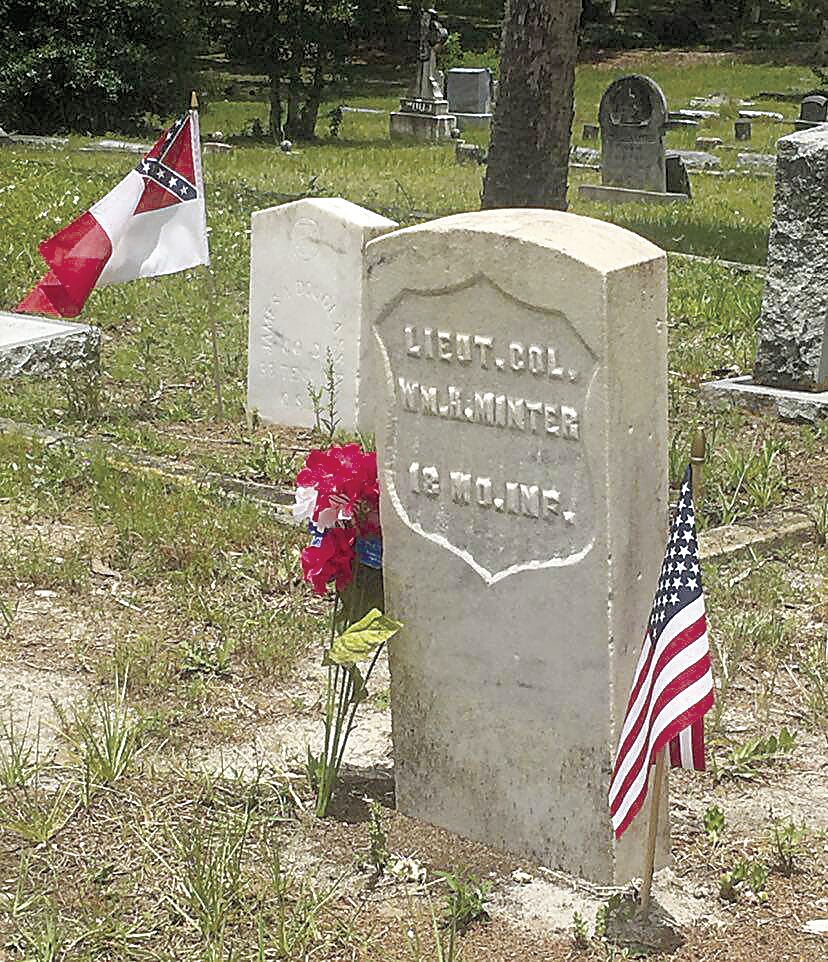 Like many of us, I have spent a lot more time out walking or bicycling in the past year. One of my favorite places to enjoy the peacefulness of life and nature is the nearby historic Oakdale Cemetery in DeLand.

On a walk one day, I stopped in what is the oldest section of the cemetery.

There lie Dr. Bert Fish, the Codringtons and the only DeLand: Helen Marguerite DeLand, the granddaughter of founder Henry DeLand. She died at 11 months in 1892 and rests next to her cousin, William Parce, who died in 1889.

There is a solitary stone with a lamb on top for “Little Jack Corell” who was the infant son of Volusia County’s treasurer, Adam Corell.

— From a monument erected in Oakdale Cemetery in 1958 by the Stonewall Jackson Chapter No. 1981 of the United Daughters of the Confederacy, Florida Division

— From a news item published in the Volusia County Record in June 1916. The article credits J.F. Allen for compiling the list, and also includes two single names: Basil and Bigelow, with no indication whether those are first or last names.

Nearby are Union veteran Henry Austin and his wife, Hettie, founder of DeLand’s First Methodist Church.

I saw what I knew was a Civil War gravestone and — though it was dirty and moldy — I could see the name: Lt. Col. William H. Minter, who had served the Union in an infantry unit from Missouri.

I am from Missouri, so I was intrigued and decided to research Col. Minter.

He was not from Missouri at all, but had joined the elite Missouri 18th from his nearby home in Illinois. I discovered that he was from Quincy, Illinois, where my paternal ancestors had lived at the same time as William Minter.

I had to know more. He surely had interacted with my family.

Minter had been born in 1827 in Monroe, Virginia (now West Virginia).

His family and early life are still a mystery, but he later listed his vocation as “river boat captain,” a profession that must have taken him to Louisville by the mid-1850s.

About that time, he met and married a Louisville widow, Louisa McDonald Hardy. Louisa was more than 20 years older than William, and she had numerous older sons and one young daughter, Charlotte, who had been born in 1844.

The Mississippi River must have called William and his new family to the river town of Quincy, Illinois. By 1860, he was working there as a bookkeeper.

Soon, though, the Civil War broke out. Minter and several associates joined the Illinois 10th Infantry’s Company E on April 21, 1861. His papers listed him as 6 feet tall, with light hair and blue eyes.

He was soon seen to be a leader, as he was promoted to second lieutenant on his ninth day of service.

One of his comrades was John Tillson Jr., sonin-law of John Wood, Quincy’s founder, who just happened to be governor of Illinois in 1860-61 as the war ramped up. Company E was stationed near Cairo, Illinois, until the 10th disbanded in July 1861.

After living the veteran life for nine months, Minter could wait no longer and used his connections to Tillson and Wood to muster into the elite Missouri 18th as an officer on March 10, 1862.

Weeks after rejoining the Union Army, Minter found himself at Pittsburg Landing, Tennessee, site of the famous 1862 Battle of Shiloh.

Led by fellow Quincy resident Gen. Prentiss, his troops were the first to be attacked by the Confederates in what was called The Hornets’ Nest. The Union suffered major losses, Prentiss surrendered, and many, including Minter, were taken prisoner.

In June, fortunately, they were released in a prisoner swap. They all regrouped and rejoined the 18th. Minter was elevated to captain, major and then to lieutenant colonel.

In September 1864, they participated in the Battle of Atlanta, where Minter suffered a head wound. He refused to be sent home and rejoined the fight. He had a company to command!

Sherman took Savannah but did not destroy it as he said it was just too beautiful. He offered it to President Lincoln as a Christmas gift.

On Christmas Day 1864, Lt. Col. Minter met up with his old friend Tillson and dined in Savannah on roast turkey and eggnog. Minter wrote a colorful letter to a friend, “Mattie,” back in Quincy, in which he described the march and last efforts and retreat of the Johnny Rebs.

The original letter is housed at the QuincyAdams County Historical Society. It is an excellent record and account of the famous Sherman’s March.

Still suffering from the head injury, Lt. Col. Minter resigned on April 3, 1865. He would have gotten word on his way home to Quincy of the South’s surrender and soon after, of Lincoln’s assassination.

Back in Quincy, with his wife, Louisa, and stepdaughter “Lottie,” he had a nice life working with his affluent friend Brig. Gen. Tillson as a manager of the U.S. Revenue Office.

In 1875, Louisa died and was buried in Quincy. William was 48 and Charlotte, 31. In 1874, Minter had applied for and received a disability pension for his war service and injury. In 1876, he married his stepdaughter, Lottie.

The nature of the relationship is not known, though it is likely that he felt responsible for her care and — knowing she had no support of her own — that he could at death leave her his pension and his property if they were married. He continued to work as a shopkeeper for more than five years.

At some point in the early 1880s, Lt. Col. Minter and Lottie migrated the long distance and moved to DeLand. How they were lured here is not known.

Perhaps they were attracted by the weather for Minter’s health, the ads with promises from Henry DeLand of land bearing lush citrus, or perhaps old soldier comrades who were heading to DeLand.

They must have lived a comfortable life in the days of DeLand’s burgeoning growth and excitement. This was when Henry DeLand and his family and friends were busy the town.

John B. Stetson was building his mansion and contributing to the establishment of what would become Stetson College.

As a decorated Union officer, William Minter would have been revered and respected. His wife was involved in the good works of the community with other prominent women of DeLand.

However, that old head wound continued to give him great pain and headaches. There were no cures and little treatment available in the 1880s, especially in a remote Florida town.

In July 1888, Lt. Col. William H. Minter took his old service pistol and shot himself in the head, dying immediately. He was 61. An old soldier — who had traveled from Virginia, to Louisville, to Quincy to the battlefields at Shiloh, imprisonment in Mississippi, more battles in Georgia, the march to victory and finally retirement in little DeLand — ended his final battle and was laid to rest at the newly established Oakdale Cemetery, on top of a hill.

Ironically, William Minter rests next to a Confederate soldier’s grave.  The two opposing flags fly proudly just feet from each other on Memorial Day.

Rest in peace, Col. Minter. A grateful nation thanks and remembers you.

— McIntyre lives in DeLand. He is a longtime educator and a history buff, born on Memorial Day. McIntyre also has an interest in cemetery restoration.