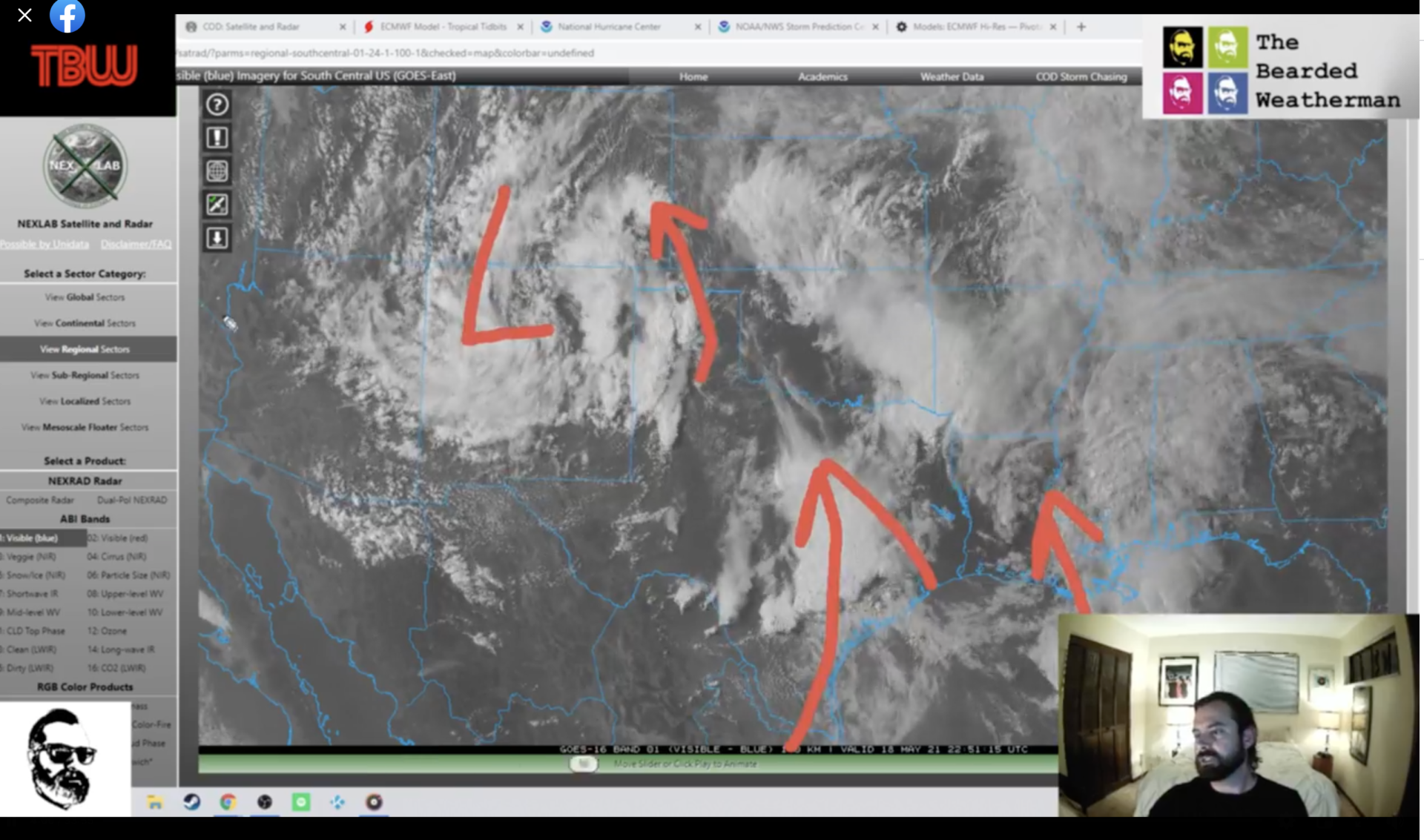 On his popular Facebook page, Mancinik goes into depth about local weather patterns in an affable and straightforward manner. People have noticed.

He began less than a year ago, and his page now has more than 5,000 followers. His most popular videos garner thousands of views.

“The Bearded Weatherman makes some of the most accurate forecasts I’ve come across in all forms of media, be it the news networks or social media,” one fan wrote in a review. “His forecasts are so spot on that they are a big part of my morning routine when planning and starting my day.”

The National Oceanic and Atmospheric Administration has published its prediction for another above-average Atlantic hurricane season, but not everyone relies on official channels when it comes to weather forecasts.

Some, like the 5,000 fans of The Bearded Weatherman, prefer the predictions of self-educated peers.

Mancinik said fans appear to appreciate his “real person” persona. Even his name hints at the informality.

“Well, I thought, there’s a lot of bearded things out there, right? Why don’t we have a bearded weatherman? And, also the fact that no one on TV can have facial hair, typically — it’s a way to differentiate myself,” Mancinik added.

Like others who came of age during the Great Recession, Mancinik has taken some nontraditional pathways to get where he is now: by day, a server at an Ormond Beach restaurant; at night (and whenever else he gets a chance), a popular livestreaming amateur meteorologist.

“I was a meteorologist in the Navy … in college, I was an English major,” Mancinik said. “Without the traditional academic background, it kind of prevented me from getting into meteorology as a full-time profession.”

A mentor in the Air Force — a crop-duster pilot with the same name and birthday as Mancinik’s — encouraged Mancinik to get qualified as a forecaster. During long shifts, while others were entertaining themselves, Mancinik read books about weather patterns.

“There’ll be a lot of downtime when we’re just on watch,” Mancinik said. “A lot of guys would go and play on Facebook or their fantasy football team, but I would just have the textbook open. Because I wanted to find out: Why did that happen?”

After seeing other amateur weather pages on Facebook, Mancinik was inspired. Originally he shared his information only with friends, who encouraged him to begin his own weather page.

Mancinik ramped up his online weather forecasting for the 2020 hurricane season.

“I think I can bring something to the table. So I just said, why not? You know, people, my friends, were encouraging me,” he said.

There was an immediate response.

“I was just really shocked at any kind of response to it,” Mancinik laughed. “I just thought, well, maybe a few of my friends on Facebook will look at it. But it developed a little bit of a following, and hurricane season last season was really busy.”

With a mic and a webcam, and a slew of resources he found through his training and through his own passion, Mancinik began livestreaming weather forecasts.

The videos are a mix of Mancinik’s down-to-earth explanations of weather patterns and his own predictions.

However, experts do not anticipate the historic level of storm activity seen in 2020.

The Atlantic hurricane season extends from June 1 through November 30.

El Niño Southern Oscillation (ENSO) conditions are currently in the neutral phase, with the possibility of the return of La Niña later in the hurricane season.

Scientists at NOAA also continue to study how climate change is impacting the strength and frequency of tropical cyclones.

“Although NOAA scientists don’t expect this season to be as busy as last year, it only takes one storm to devastate a community,” said Ben Friedman, acting NOAA administrator. “The forecasters at the National Hurricane Center are well-prepared with significant upgrades to our computer models, emerging observation techniques, and the expertise to deliver the life-saving forecasts that we all depend on during this, and every, hurricane season.”

WILL WE RUN OUT? — Here are the 21 names that will be used for tropical storms in the coming season. Ana has already been used, for a preseason storm that fizzled out near Bermuda. If we run out of names, as in 2020, letters of the Greek alphabet will be used.

An exercise in humility

Predicting the weather is part detective work, part an exercise in humility, he said.

“It’s detective work; it’s investigation,” Mancinik said. “At first of course, I’d be wrong, and then often am wrong, still.”

Investigating those mistakes is how you learn, Mancinik said.

“Becoming a better forecaster is learning from your mistakes. Making a mistake and investigating it really critically, and what are the factors in play that changed the forecast is how to learn,” he said.

The weather is a huge and complicated system, Mancinik said — and that’s where the fun and humility come in.

“The bottom line is that it’s like what Jeff Goldblum says in Jurassic Park — a butterfly flaps its wings and you get rain in Central Park. Those little tiny perturbations will throw off the models, and that’s where you get errors,” Mancinik said. “That’s the humility that has to come … You have to have humility in front of it, always. I mean, in the end, the weather is, to a certain degree, ultimately unpredictable, right?”

But putting the hugely complicated systems into terms everyone can understand is part of his passion.

“It’s all relations, you know, it’s like how there’s a relation between temperature and air pressure. So it’s like finding that relation for people and how they communicate, how they interpret and how they absorb the knowledge and interpret it,” Mancinik said.

Attention that has come from people all over the United States and the Caribbean has been gratifying, he said.

Facebook was a natural fit for this kind of production, he said.

“There’s a lot of different types of people that come to these videos and interact,” Mancinik said. “That’s what I was hoping for, too, was the creative space on Facebook, where people of different backgrounds and maybe political beliefs have a space to interact without having to deal with all that, without having to bring all that in. Weather is a great medium: It’s apolitical and everybody has to deal with it.”

Mancinik encouraged others to share their hobbies and passions.

“I highly, highly encourage someone with a passion to follow it,” Mancinik said. “For a while, I sort of let my passion atrophy, and I didn’t really engage with it. And by engaging in it, my life is just improved. I just feel more like I’m doing something good, a service to people.”

Bearded Weatherman: What should we do now?

And what predictions does he have for our upcoming hurricane season?

“Well, Colorado State University has an outlook every year, and they predict an above-average hurricane season. But the averages have changed, because we’ve had more storms on average over the last 30 years,” Mancinik said.

The National Oceanic and Atmospheric Administration (NOAA) is predicting a more-active-than-average 2021 hurricane season, according to their most recent forecast.

“What should you be doing? Getting those supplies right now,” Manicik said in a May 21 video. “You guys are watching my content, or content like it, on Facebook and YouTube, so you know way in advance sometimes when to expect. I’m saying right now — early June, mid-June, we could be expecting something here in Florida or in the Southeast.”

“This is the time. Get ready now,” Mancinik told his viewers.