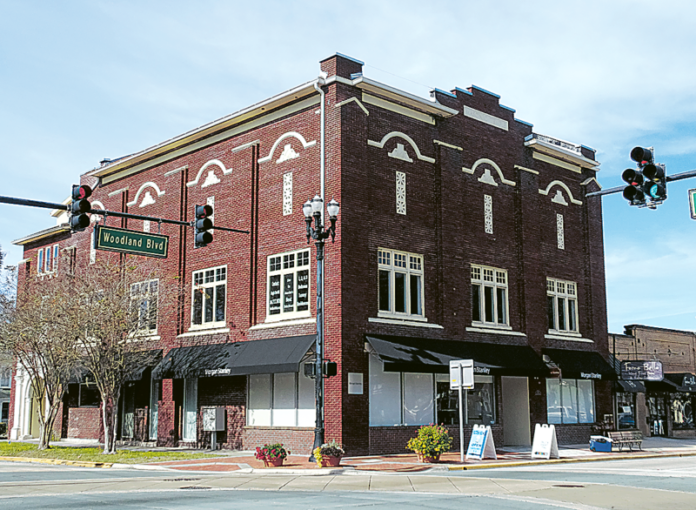 The plan, tentatively titled Masonic Lodge Apartments, is the latest in a long string of attempts to renovate the 1925 building at 142 S. Woodland Blvd.

“That building has had many different lives,” owner Matthew Lvoff told The Beacon.

Lvoff purchased the 5,445-square-foot building for $1.5 million nearly a year ago. He is the latest owner with plans to overhaul the top two floors of the three-story structure, floors which have remained empty for decades.

“The top two floors are open plan — you can design practically anything you want,” Lvoff said. “I have four walls. The analogy is, it’s a white piece of paper. You can draw whatever you want.”

Before Lvoff, another investor planned for luxury apartments around 2017, but those plans never materialized. Volusia County Property Appraiser records show that the building has changed hands at least six times since 1996.

The historic building is one of several properties Lvoff has invested in in DeLand, including homes on North Clara Avenue and Minnesota Avenue, and 111 W. Indiana Ave. (the former home to DeLand Cyclery and current home to DeLand Coins & Collectibles).

Luxury apartments are not the goal for Lvoff, he said.

“Everywhere I look it’s luxury this and luxury that. Where are normal people supposed to live?” Lvoff said.

Instead of a handful of luxury apartments, Lvoff plans 12 high-efficiency, eco-friendly studio apartments. At around 450 square feet each, the plan allows six apartments on each floor, including two common areas.

While the actual rent rate is yet to be determined, Lvoff underlined the notion that reasonable prices are the goal.

“One of the goals is to provide housing at not-exorbitant prices. There is a bit of a housing crunch in DeLand,” Lvoff said. “The area could use reasonably priced housing.”

JNS, a Denver firm that has worked on converting historic buildings to multifamily housing, has completed the initial plans.

Blaire Weiser, an associate at the company, said the goal is to respect the history of a place while giving it new life.

“Maybe that’s why it’s had such a rough time. The building was built for a certain purpose in mind, and no one’s gotten that piece of it. We talk at our company about telling the story of a building, but it is so important to bring that to life, because, if not, you just have another space,” Weiser said.

The story of the building was a motivator for Lvoff, as well.

“It is a fun and interesting project,” he said. “We want to respect the original look and original architecture … and the historical roots, while providing reasonably priced housing.”

The long process of renovating the building is just beginning, Lvoff said. The DeLand Historic Preservation Board recently approved windows for the third floor, a necessary step to making the third floor a usable residential space.

But there is one major holdup — securing an engineer. That has been difficult, Lvoff said, because the COVID-19 pandemic and an uptick in construction projects have made building engineers in high demand.

“The project basically treads water, financially with the interest rates where they are at currently,” Lvoff said. “But, we put a man on the moon, so we should be able to manage this.”

Originally constructed in 1925 and opened in 1926, the three-story historic building at the northwest corner of Woodland Boulevard and Howry Avenue in Downtown DeLand was built as a grand meeting place for the Masons, a secret society that enjoyed a resurgence of popularity at the time.

The previous Masonic Lodge building, a wooden structure at the northwest corner of New York Avenue and Woodland Boulevard, had burned down in the 1886 Downtown DeLand fire.

Around 1928, the Masons lost the building in bankruptcy proceedings following the end of the Florida-land-boom, Florida’s first real estate bubble.

For many years, the building housed different furniture outlets, among other businesses. Since the early 1990s, however, the top two floors have been vacant.

Renovation attempts in the 2000s removed many of the remnants of those businesses, leaving the top two floors as large, mostly empty rooms.

The second floor was originally a large banquet hall for the Masons, and the third floor was intended as the meeting room for the secret society. Because of this, it is a completely enclosed room with no windows. To allow for airflow, the original architects included a huge exhaust fan, which still exists, and neatly concealed apertures that allowed air to circulate without revealing to the outside world any aspect of the Masons’ secret rituals.

The interior of the third-floor meeting room of the Masonic temple, as it is today. In the foreground at right is a trough in the flooring that was likely used in ritual elevating a member to Master Mason.

The ritual, as explained in Duncan’s Ritual and Monitor of Freemasonry (a book detailing masonic rituals, first published in 1866), acts out the tale of Hiram Abiff, who is described as the chief architect of Solomon’s Temple, the first temple in Jerusalem, according to the Hebrew Bible. Abiff is supposedly murdered by three “ruffians” after refusing to give them the Master Mason secret passwords, and his body is lost for 15 days.

As part of the ritual, the member was likely lowered into the trough, symbolizing the grave of Abiff. When he is pulled to his feet, he would arise as a Master Mason, and would be given a secret Masonic word. The photo also shows the apertures on the ceiling that allowed for airflow, and some of the original architectural molding.