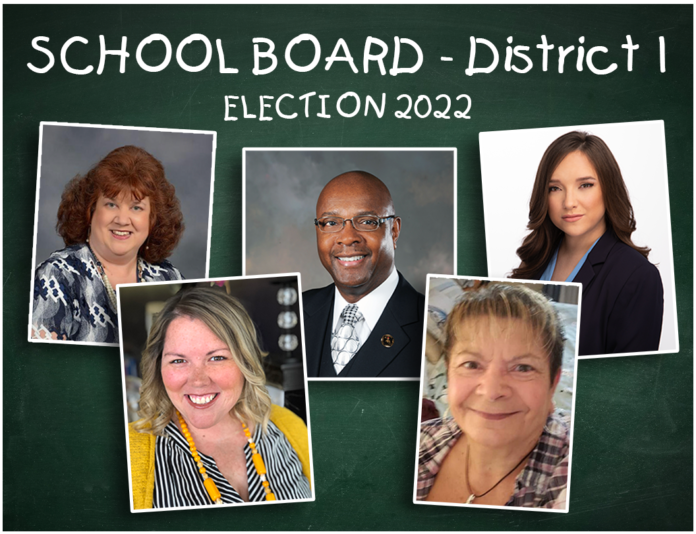 The 2022 Volusia County School Board elections have been more political than they’ve been in many election cycles, despite the fact that the races are nonpartisan.

Particularly in Florida, school boards have become battlegrounds around which political parties mobilize their forces, as in District 5, where incumbent Ruben Colón, a Democrat, faces Fred Lowry, a Republican.

Lowry has been endorsed by Gov. Ron DeSantis, who took the unusual move of weighing in on local school board races this year.

Despite all this, the School Board candidates who have attended local forums repeatedly highlighted the need to keep politics out of schools, even while they must wrestle with larger political forces in their own election contests.

Like Ruben Colón in District 5, District 1 candidates — three Democrats and two Republicans — are seemingly united in the belief that partisan politics need to stay out of the School Board. (District 1 encompasses most of West Volusia, except for the Deltona area).

But again, that was easier said than done.

At two separate candidate forums — one hosted by Moms for Liberty June 27, the other by DeLand Pride July 6 — most of five candidates in the race attended, with one exception.

Candidate Jaclyn Carrell, a registered Republican, told a radio host her run for the School Board seat is part of a “spiritual war” to defend “Western civilization.” Her membership was revoked in February by Moms for Liberty due in part to concerns about a series of domestic violence and child abuse charges against Carrell in 2014 (all the charges were dropped). She declined to attend either event.

Forum questions at the Moms for Liberty event included “What are your views on inappropriate videos about controversial topics like gender identity or critical race theory?” but also, “The School Board is a nonpartisan race; how will you ensure you keep politics out of the School Board?”

Moms for Liberty is an organization formed in response to mask mandates in schools, and its mission statement “is to fight for the survival of America by unifying, educating, and empowering parents to defend their parental rights at all levels of government.”

At the DeLand Pride forum, questions included “With the passage of the ‘Don’t Say Gay’ bill, how will you protect students’ privacy when they may need to confide in someone at school?” and “Would you support a LGBTQ+ bullying awareness week, which was voted down last year?”

DeLand Pride is a local organization with the mission “to attract LGBTQ members and their allies to our community by nurturing professional and personal relationships and providing an active and positive force in Volusia County and beyond.”

The divide between political parties, in an ostensibly nonpartisan race, caused at least one candidate to change her registered political party.

“I am enough of a pragmatist to say: We are in a two-party system, and that to go forward, I felt I had to pick a team,” candidate Ginny-Beth Joiner, a DeLand business owner, told The Beacon. Joiner was previously registered with no party affiliation, but changed her registration to Democrat in June.

She was reluctant to switch.

“I had people telling me to pick a side, and even though I believe in my core that you can’t change the system by being part of the system, I felt the only way to be viable as a candidate was to declare a party,” Joiner said.

That pragmatism is one reason Joiner is running, she said. With a nation regularly described as divided, Joiner argues that her ability to listen to many different voices and arrive at a reasoned decision is one reason she is best for the School Board job.

The sense that political parties matter in this race may be due to 2020’s hottest topic: mask mandates. Incumbent Jamie Haynes has consistently opposed a mask mandate in school, and has been lauded by conservative groups, including Moms for Liberty. Haynes is a registered Republican.

Lowry’s endorsement by Gov. DeSantis in the District 5 race is on the basis that he is “pro-parent,” a movement that grew out of the perception that parents rights over their children were being eroded by mask mandates and curriculum that was labeled as progressive brainwashing.

Unlike the more high-profile District 5 race, the five District 1 candidates have so far garnered only a handful of endorsements.

Notably, Carnicella, who has little school experience, was endorsed by Sheriff Mike Chitwood.

“The sheriff is a good friend, and a good person,” Carnicella said at the June 27 Moms for Liberty forum. “I am proud to be endorsed by him.”

Carnicella said she quit her job as a mental-health caseworker to run for School Board. She is running a somewhat unusual campaign based on her 24 years as a mental-health professional, specifically experienced with programs at Tomoka Correctional Institution and Volusia County Branch Jail.

“You know, all of those people in jail? They are also products of Volusia County Schools,” Carnicella told the Moms for Liberty crowd June 27.

Differing from the other candidates, Carnicella is running a race entirely based on one issue: providing more mental-health programs and “wraparound services” offered to students in partnerships with local nonprofits.

“We need change,” she said. “Our students are hurting.”

“Jamie Haynes has a proven record of hearing and supporting what her constituents want. She has stood against all other board members when needed as well as by the law,” the group wrote.

Al Bouie unsuccessfully ran against Haynes in 2018, and lost by only 1,652 votes, or 3.94 percent. He is campaigning on his 40-plus years of experience in the local school system, as a teacher, principal of elementary, middle and high schools, curriculum supervisor, and director of teacher recruitment.

“I believe I am the best and most qualified candidate,” Bouie said. “Failure in a school is not an option.”

Politics, Bouie said, have no place in schools.

Bouie is a late entry in the race, with Haynes, Carrell and Carnicella all filing in 2021, and Joiner in January 2022. Bouie filed May 10 of this year.

Jaclyn Carrell was close behind Haynes with $10,505, but had spent $8,746. Other than a $1,500 loan from herself early in the process, Carrell’s donations have come from individuals who have given large and small amounts.