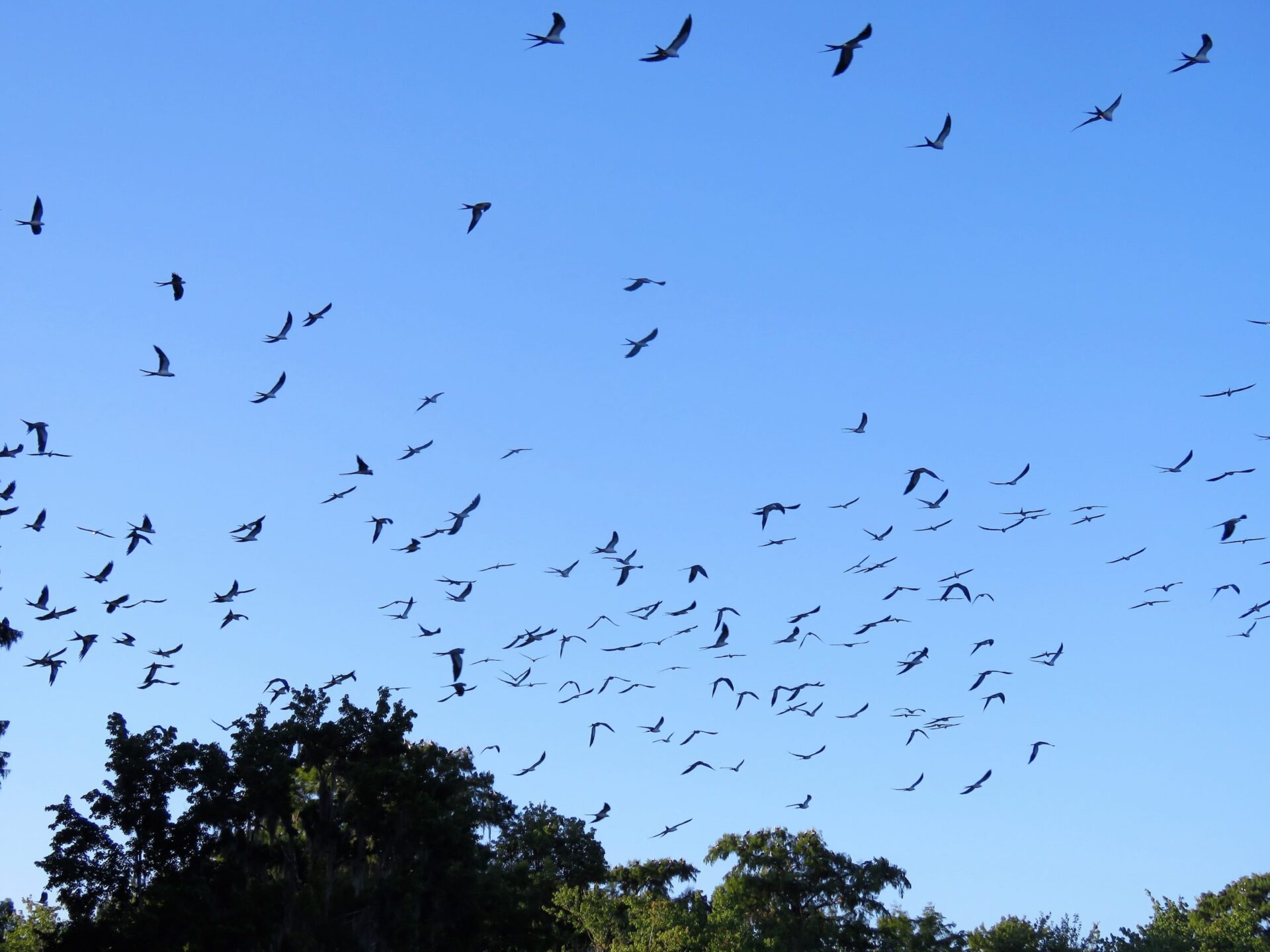 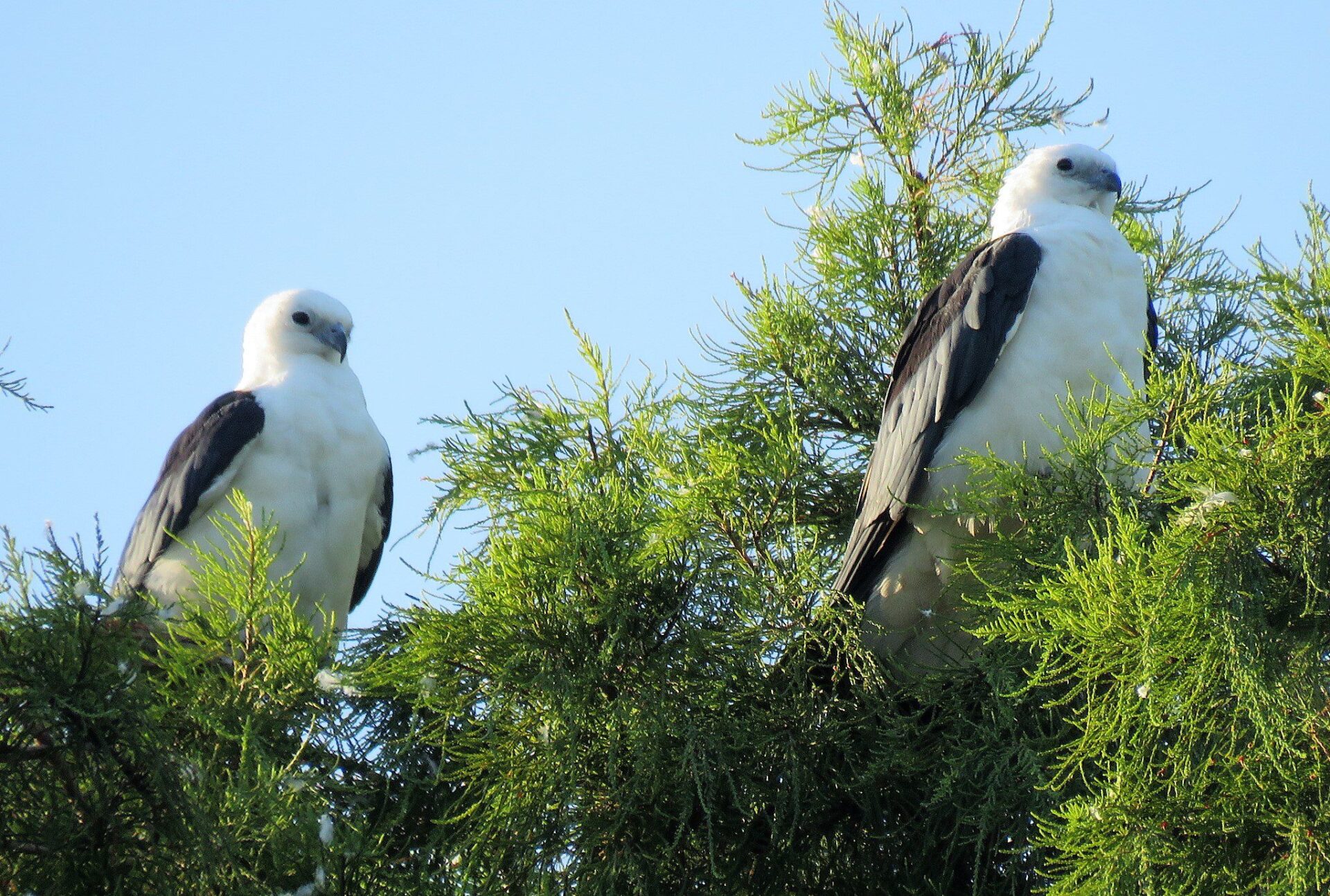 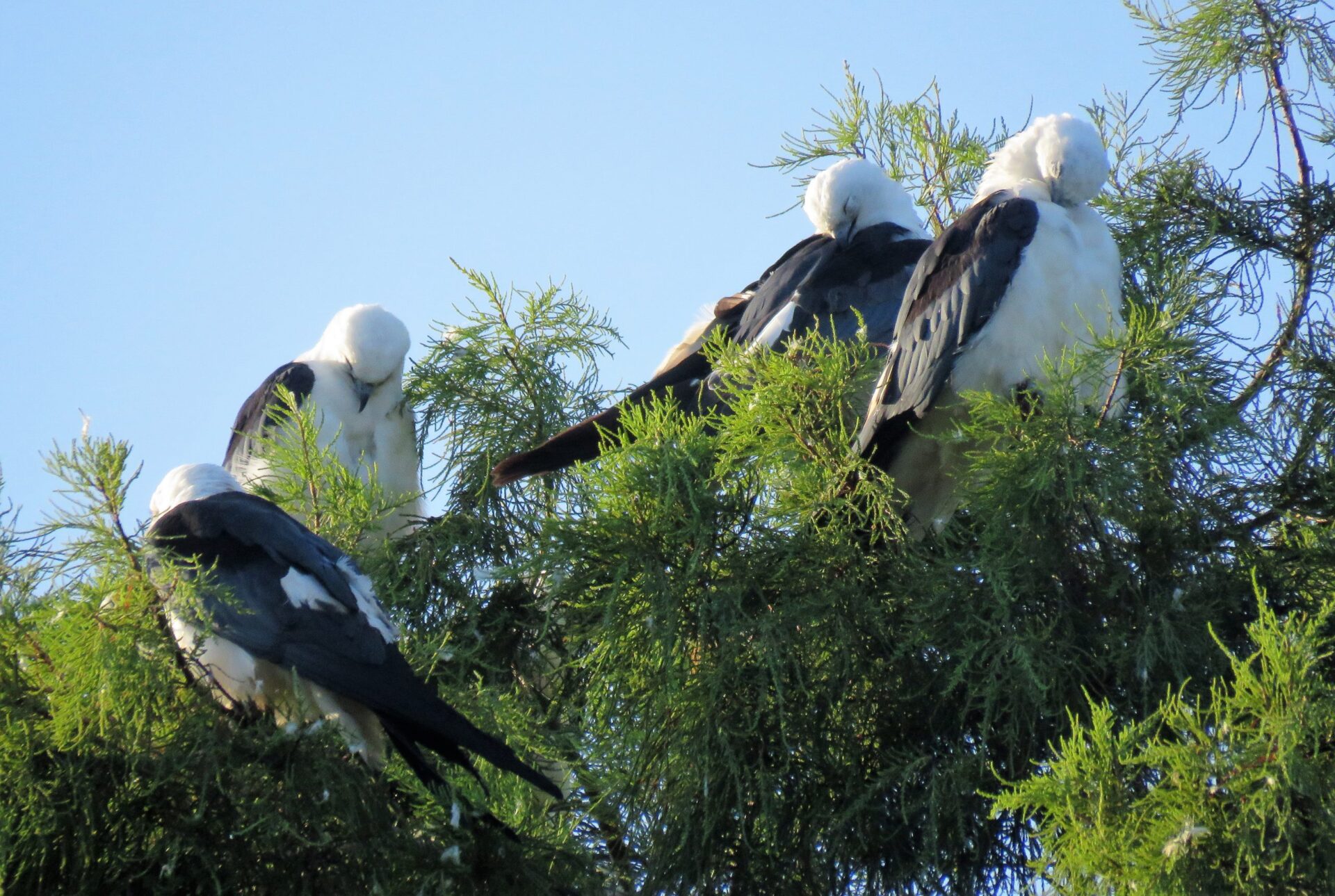 Throughout the billowy marshlands, dense woodlands and meandering waterways of Lake Woodruff National Wildlife Refuge, each season showcases a variety of species for nature lovers to watch, study and photograph.

Possibly the most dramatic of these is the annual influx of swallow-tailed kites.

With summer temperatures peaking, the kites stop to roost at the refuge — in one of the world’s most-populous layovers — on their way to winter in locales as far as South America.

Lately, photography hobbyist Sam McGee of DeLeon Springs has been taking a lot of what she calls “sky shots” and posting them on social media.

One might say McGee is “enraptored” with the graceful birds

Not far from the refuge, at the end of Mud Lake Road in DeLeon Springs, McGee said, one day she saw five of the black-and-white-plumed airborne acrobats careening above her house.

“I’ve heard them too, and I think for the first time. ‘Screee!’” she said, mimicking their overhead cries.

The loud calls indicate the birds are alarmed or clashing with other kites, according to www.allaboutbirds.org.

“There are over 1,000 kites that consistently roost on the refuge, and the population on the refuge could be considered stable,” Refuge Manager Candice Stevenson wrote in an email to The Beacon.

The refuge might have the second-largest pre-migratory roost of swallow-tailed kites, “which is impressive and something to celebrate,” Stevenson noted.

But, overall, the population has suffered a decades-long decline.

“Their U.S. range covered much of the Southeast from Texas to South Carolina and south through Florida and even as far north as Minnesota,” Stevenson wrote. “Now the range is basically parts of Florida with sites in a few other states.”

It’s a good-news/bad-news scenario, according to the refuge manager.

“The bad news is that we have a depleted population left of swallow-tailed kites in existence; but, the good news is that the populations we have are being protected, for the most part, and are stable to possibly increasing,” Stevenson wrote.

Currently, there is a breeding population of no more than about 2,500 pairs, according to the Avian Research and Conservation Institute.

While the swallow-tailed kite does not have federal status as an endangered species, it is “considered of critical conservation concern by all state agencies, the U.S. Fish and Wildlife Service, Partners in Flight, and conservation organizations,” according to the institute.

The Lake Woodruff staff does not disclose the exact location of the roosting spot along a Lake Woodruff tributary, Stevenson said in a phone interview.

“We are fighting to protect these beautiful birds in what little habitat they have left during a very sensitive time of their life cycle,” she explained. “While they’re roosting at Lake Woodruff NWR, they are trying to eat and rest before making the long and treacherous journey to Mexico, the Caribbean, and South America.”

Should boaters happen upon the roosting area, it would have to be early in the morning for a glimpse of the congregation.

By about 9 a.m., the kites fan out for miles for food and frolic, Stevenson said.

“I get calls each year about this time with people asking me about where to go see the kites,” she said. “I always tell them that I frequently see them flying around all over the area as far as Highway 46 toward Mims and all over DeLand.”

To view birds from land on the refuge, Stevenson recommends people visit the impoundments and walk out to the observation tower.

“We don’t reveal the exact location of the roost because we are trying to protect them from disturbance,” she wrote. “There have been many instances where kites in other areas have been disturbed to the point that they have left the roost site in search of another location. With the loss of natural habitat in Florida, there are few places left to go.”

That search might imperil the travelers who are here preparing for the long journey ahead.

“Sometimes, those birds may not make it,” Stevenson wrote.

Nesting occurs in March and April, upon the birds’ return from their winter getaways.

Incubation lasts 28 days, and the kites are 36 to 42 days old when they fledge, according to www.beautyofbirds.com.

Part of the purpose of the pre-migration roost is preparing recently hatched birds for their inaugural flight.

“The young would be trying to grow and have time to work on the mechanism of flying before making the journey,” Stevenson wrote.

How long that takes is different for each bird, depending on when they were hatched and how soon they fledged, she said.

“That’s why they roost here for several months,” she wrote. “It’s not the same number of birds the entire time. They show up, eat, rest, then leave when they’re ready. This year’s fledglings would try to stay for as long as they need before heading south.”

First-year survival of swallow-tailed kites in Florida is very low — possibly the lowest within the U.S. breeding range, according to a study by the Avian Research and Conservation Institute.

This is another reason refuge personnel discourage visitors from going too close to the roost site.

“This is a sensitive time for the birds; it takes a lot of energy to fly and they need to rest and eat enough to make it on their long journey,” Stevenson wrote. “If they are constantly flushed, every time they fly, that burns calories that they will have to make up for and find even more food.”

Swallow-tailed kites, whose small body size is belied by their broad wingspan and elongated forked tail, eat a wide variety of prey, many insects, small reptiles and amphibians, and may also take small birds or mammals, according to Stevenson.