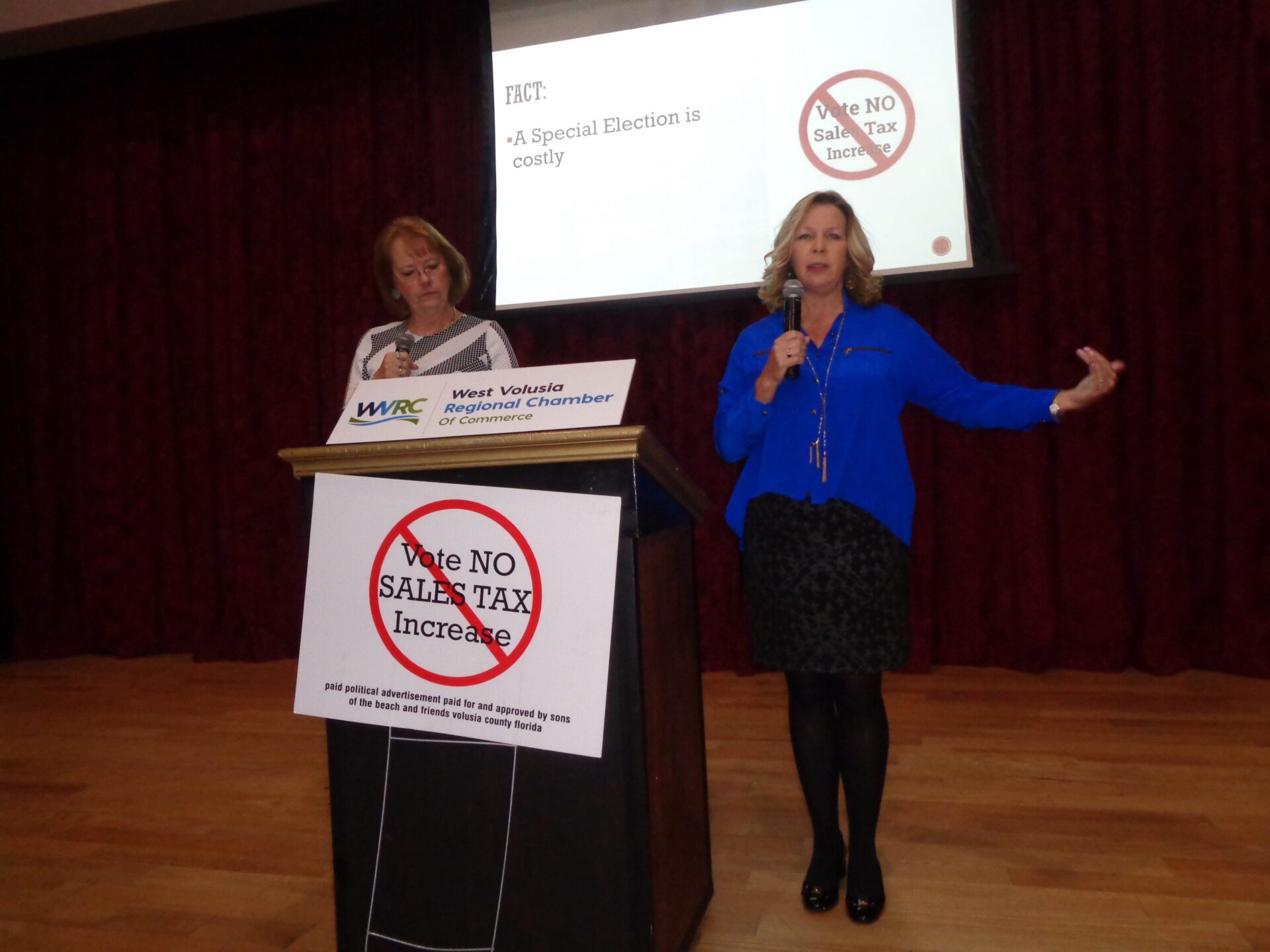 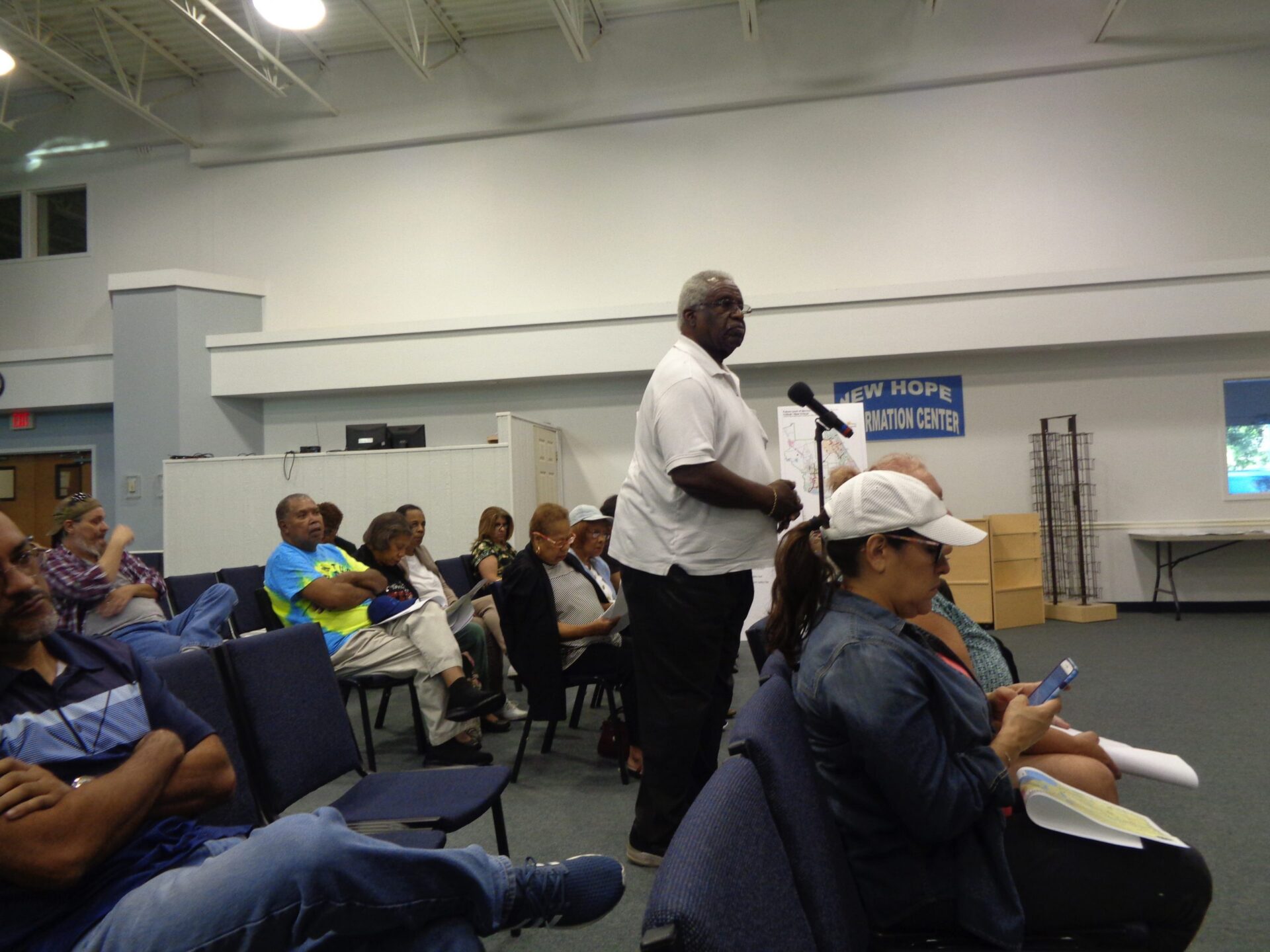 As they sipped coffee and orange juice, members of the West Volusia Regional Chamber of Commerce and visitors assembled this month to hear Volusia County Manager George Recktenwald make the case for raising the sales-tax rate.

In Volusia County’s first vote-by-mail-only election, voters will cast ballots in May on the question of whether to increase the county’s sales-tax rate from 6.5 percent to 7 percent to raise money for roads and water-quality projects.

“The infrastructure of this county is a nationwide problem. We’re falling behind,” Recktenwald told the group at Gateway Center for the Arts in DeBary.

Recktenwald, who formerly served as the county’s director of Road and Bridge and later Public Works, said the county’s thoroughfare network appears to be in better shape than that of many other places.

“For the most part, we’ve done pretty well,” he said.

He noted that having available funds can save money in the long run, if problems are fixed more quickly before they worsen.

Recktenwald said the county has built some $100 million worth of roads since 2004, when the county floated a $70 million bond issue.

The May 21 vote on the half-cent local-option sales tax will be the climax of an effort to produce more revenue for building new roads, fixing existing ones, developing water-quality projects, and improving drainage in flood-prone areas.

The businesspeople have clearly thought about the proposed tax, and they were generally eager to state their stance.

Asked what happens if voters reject the tax, Orange City Council Member Kellianne Marks replied, “A lot of things don’t get done — roads. We need a new police station. We don’t have the money.”

Steve Pierce, owner of Performance Tire and Wheel in Orange City, summed up his position with one word: “Against.”

The tax increase, if approved by voters, is expected to yield approximately $45 million each year for 20 years. The money would be divided among the county government and each of the 16 cities.

The need for money to pay for major capital projects such as roads and bridges will be more acute in the years ahead, Recktenwald cautioned, as federal funding may decline. If counties and cities are to qualify for diminished federal shares of funding, he said, they will likely have to offer larger matches of local dollars.

“The only time grants come is when you put some money toward it,” Recktenwald said.

“Some money” could come from the proposed surtax.

The sales tax, however, is not the most equitable source of revenue, concluded Michael Wright, a certified public accountant and former member of the Orange City Council.

“It’s a regressive tax,” Wright said, in that higher-income people pay the same percentage as those with lower incomes.

“If you go to Seminole County to shop, like if you go to Macy’s, you’re already paying 7 percent,” she noted.

Seminole County, with the approval of its voters, has a half-cent sales tax for school construction — just as Volusia County does — and another half-cent tax for transportation.

Of Florida’s 67 counties, 61 already have sales taxes of 7 percent or higher.

Florida law allows counties, with the consent of their voters, to levy local-option sales taxes for a variety of public purposes, including transportation capital needs, transportation and mass-transit operations, and indigent medical care.

The state sales tax is 6 percent, and a portion of that is shared with local counties and cities.

Advocates of the proposed sales tax say the listing of particular projects and the promise to appoint an oversight committee of residents may enable them to overcome resistance to higher taxes.

One key word often heard in the discourse about the tax is transparency, showing the paying public how the money will be spent and, later, how it was spent.

“It’s not for buildings. It’s not for mass transit,” Recktenwald told the Chamber group. “You know the money is going for roads and sidewalks.”