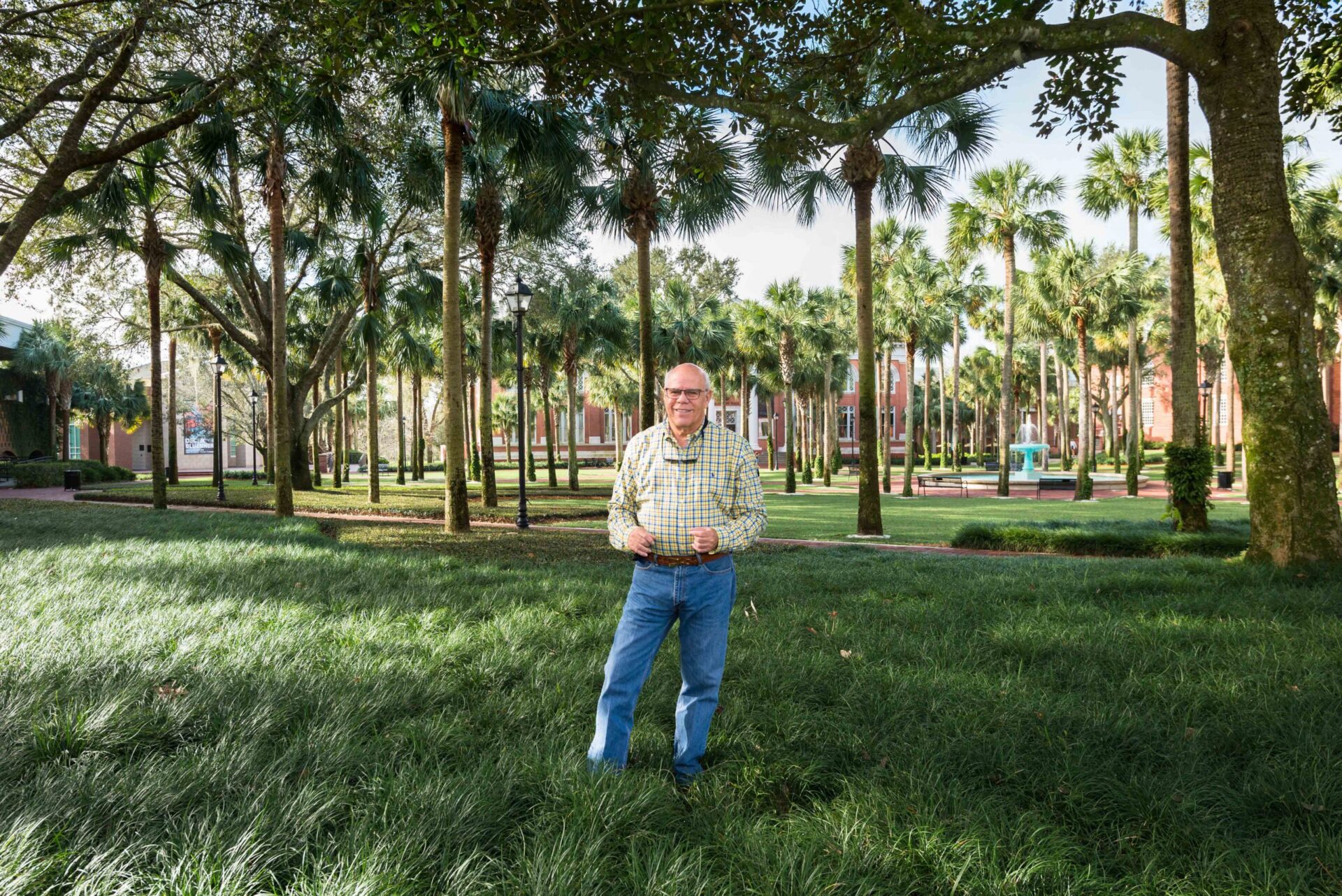 Dave Rigsby liked to say he had the nicest office on Stetson University’s DeLand campus.

Rigsby, manager for the Stetson grounds department and senior assistant for special projects, retired Jan. 3, after 42 years on the job. He spent his days outside, spread among the campus’s more than 176 scenic acres.

Rigsby credited his professional grounds staff, saying they worked hard, often in inclement weather, to keep the campus looking so nice. Stetson was named among the 25 Most Beautiful College Campuses in the South in 2018 by Country Living magazine.

Stetson President Wendy B. Libby, Ph.D., said Rigsby played a critical role in helping transform the grounds after she arrived in 2009.

“When I think of Dave, I think of a fine thoroughbred racehorse, anxious to run!” she said. “When we first met, he had so many outstanding ideas for the improvement of our campus landscape and walkways … but he did not have the budget to do most of these projects. I am so thankful we could support his vision to allow this campus to be, as many would call it, ‘stunning.’”

Rigsby was superintendent of parks for the City of DeLand in the late 1970s when then-Stetson President Pope Duncan asked him to come to work for the university. Rigsby started Oct. 2, 1978.

“We have come a long way from our early days and the campus experience now shares some incredible spaces, including the President’s House, the Palm Court and the Stetson Green. These all form a series of connected spaces throughout campus that create a sense of arrival and a true sense of space,” Rigsby said in a 2017 story on Stetson Today.

Rigsby asked if Stetson Today would illustrate that story with a photo of the entire grounds crew — not just him — to give public recognition to his staff for their dedication.

During his time at Stetson, Rigsby also rose to become a key leader in the city. He served as a DeLand city commissioner from 1980 to 1993, and mayor from 1993 to 2001, as well as on many other government boards and with civic groups.

“As with many of our staff and faculty who have spent their working lives here, Dave was always deeply interested in our long-term success,” Libby said. “He was a positive force for change and progress and an ardent cheerleader for Stetson University. His time as mayor of DeLand added to his credibility; when he bragged about Stetson, people listened!”

Rigsby retires after four decades at Stetson, but his impact will be felt for years to come, said Bonita Dukes, associate vice president of facilities management.

“Dave brought life, beauty and appreciation to every landscape project he touched,” she said. “His talent can’t be replaced. Our campus’s beautifully landscaped grounds are a result of Dave’s wisdom to design and create experiences and fond memories of Stetson for generations to come.”

She added, “We will miss Dave’s keen eye for detail and warm spirit, but wish him well in his retirement.”

— Lancaster writes for Stetson Today, the university’s online news website. Find out about news, events, concerts and more at Stetson University. Visit www.stetson.edu/today, and scroll down to “Subscribe to Stetson Today.”