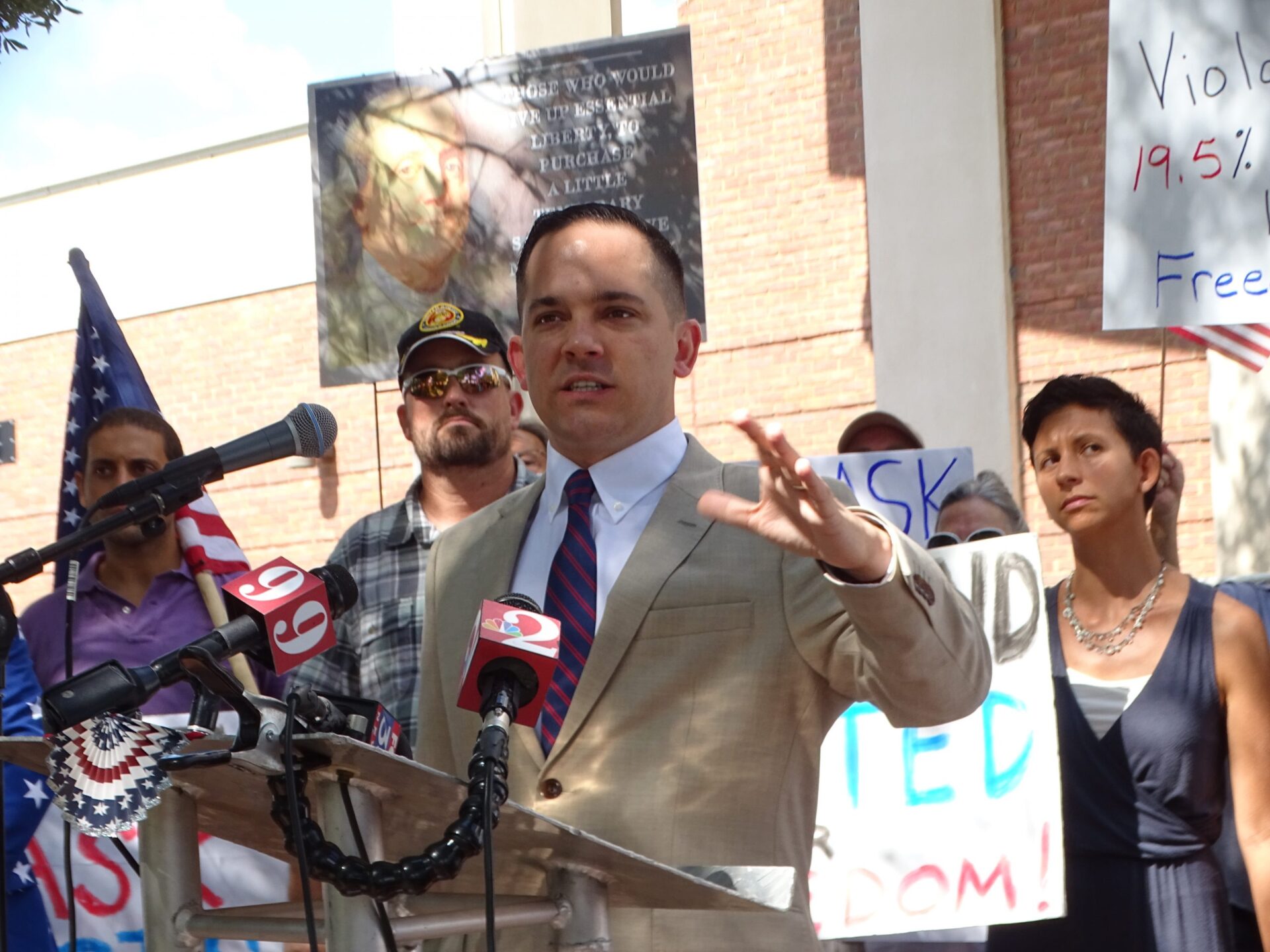 A Volusia County circuit judge has dismissed a challenge against a DeLand ordinance requiring people to wear masks inside businesses and other indoor locations.

The lawsuit, brought by Lake County state legislator Anthony Sabatini on behalf of Brian Dolata, a truck driver and resident of DeLand, was filed July 13, days after the city passed the ordinance.

Dolata had alleged that the ordinance infringed on his personal liberty and his right to privacy under the Florida Constitution.

In an attempt to slow the spread of COVID-19 in the city, the DeLand City Commission passed the mask law in an emergency meeting July 2. It requires mask-wearing inside businesses, and provides for fines of $25 for a first offense, $50 for a second and $100 for a third.

Before fines are levied, a person will be warned and asked to comply or explain how he or she is exempt. Among other exceptions are children younger than 6 and those with medical conditions preventing them from wearing a mask.

The ordinance does not include criminal penalties, and citations aren’t being issued by DeLand police. Instead, the city’s code-enforcement department will follow up on any complaints about noncompliance. The new rule also requires DeLand businesses to post notices that masks are required for entry.

Circuit Judge Randall H. Rowe III dismissed the request for an emergency injunction against the ordinance, and ruled in favor of the city today.

“This is an extraordinary time in our history. The COVID-19 pandemic of 2020 is now threatening to overtake the Spanish influenza pandemic of 1918-1920 as the deadliest in our country’s recorded history,” Rowe wrote in the conclusion of his 24-page dismissal.

“Because extraordinary times call for extraordinary measures, state and local governments all over America are enacting emergency laws designed to protect their citizens from the spread of this deadly virus — just like they did 100 years ago,” Rowe continued.

The judge called DeLand’s ordinance “an exercise of good governance,” and said the city acted to protect the health, safety and welfare of its citizens.

He said that the requirements promulgated by the ordinance were of minimal impact to the average citizen.

“The City’s ordinance created a de minimis requirement that people wear a simple cloth face mask covering their nose and mouth only in the limited circumstance of when they are in a business establishment, and the ordinance provides for a multitude of exceptions,” Rowe said.

Rowe also said the ordinance complies with the Florida Constitution.

“The Court cannot help but note that the only way the Plaintiff might suffer irreparable harm here is if the City’s face mask ordinance is found unconstitutional and the Plaintiff, therefore, is placed at greater risk of contracting COVID-19 because the citizens of DeLand stop wearing face coverings in public,” Rowe wrote.

The judge also noted that the plaintiff didn’t actually provide substantive evidence on how the ordinance would harm him. Rowe also said that if Dolata was fined under the ordinance, he would have a chance to have his day in court to contest the fine.

“Finally, if the Plaintiff violates the City’s ordinance and receives a citation imposing a fine on him, he would have an adequate remedy at law because he could contest the citation and fine in court,” Rowe said.

On July 10, ruling in another lawsuit filed by Sabatini, a Tallahassee judge upheld a similar ordinance in Leon County, saying it did not violate any constitutional rights. The plaintiffs have appealed, according to Tallahassee-area news-media reports.

Since its passage, no fines or citations have actually been issued under the ordinance, according to city officials.

The city held a second reading of its mask ordinance at an Aug. 31 meeting, to formally put the ordinance onto its books.

Some tweaks to the original ordinance are included, such as adding exceptions for hearing-impaired people (to make lip reading easier) and for people speaking at organized events when separated by 6 feet, or by a barrier.

The age at which masks are required was increased from 2 to 5 years old, in part because Commissioner Kevin Reid noted how difficult it would be for his 2-year-old son to wear a mask correctly.

“Unless I duct tape that mask to his face, It’s not gonna stay on,” he said. “If I vote in favor of this [as originally written], I’m voting, in essence, to break it.”

About 15 members of the public spoke at the Aug. 31 hearing, with all but a couple against the mask mandate.

Dolata was first among the speakers.

“Never in my lifetime, I thought I would go through this,” he said. “I served my country to fight [against] this tyranny that’s going on.”

He also called Dr. Anthony Fauci, director of the National Institute of Allergy and Infectious Diseases and one of the lead members of the Trump administration’s White House Coronavirus Task Force, “a fraud.”

Other speakers, like Rachel Cohen, alleged that they had medical reasons for not wearing masks, and that wearing a mask wouldn’t protect those around them to any significant degree.

“The risk analysis shows me that there is more risk to my health in wearing a mask than not wearing a mask,” Cohen said. “There is very little risk improvement for others if I wear a mask.”

Commissioner Jessica Davis, who recently survived a bout with COVID-19 that landed her in the hospital, pushed back against the majority of the speakers, noting that people in DeLand have indeed died from the disease.

“Many people have died, that we can now know by name,” she said, pointing out her own great-grandfather, who was in a nursing home, was a victim.

In the end, the commission voted unanimously to approve the ordinance once again.

The ordinance is effective until either the state’s or the city’s COVID-19 emergency declarations expire, whichever comes soonest.