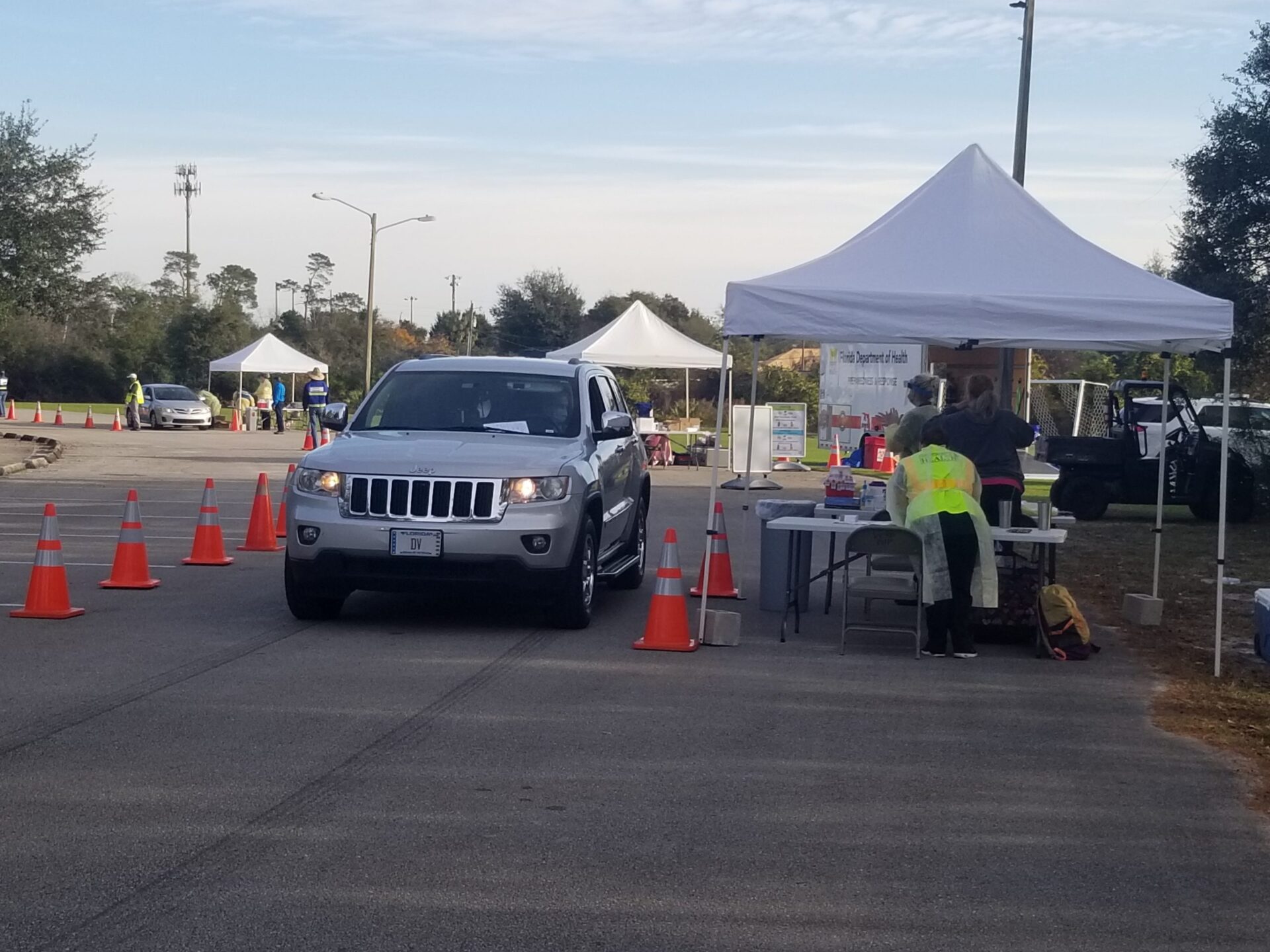 The Volusia County Health Department’s vaccination clinic at Dewey O. Boster Sports Complex in Deltona Jan. 7 was a stark contrast to the first two clinics in Daytona Beach, which were marred by traffic jams and disappointed hordes of people who had to be turned away.

LINED UP — Cars line up before the 9 a.m. start of the COVID-19 vaccine distribution event at Dewey O. Boster Sports Complex in Deltona. The event, which allowed people to make appointments several days in advance, experienced nowhere near the traffic woes that plagued the first-come, first-served clinic in Daytona Beach Jan. 4-5.

Older adults from Volusia County and surrounding areas were able to register online for the Deltona clinic, setting appointments to receive the first of two doses of the COVID-19 vaccine. As a result, only those who were able to get the vaccine showed up.

No appointments or registration were available for the first clinic on Jan. 4 in Daytona Beach, and many people lined up for hours on LPGA Boulevard in Daytona Beach. Ultimately, that clinic reached capacity an hour before it was even supposed to open.

The Deltona event administered some 1,000 vaccinations its first day, and will administer another 1,000 on Friday, Jan. 8. According to several people who received their shots in Deltona, the clinic was very well-organized.

Before the clinic opened at 9 a.m., Deltona resident Al Ferguson was first in line for his appointment for between 9 and 10 a.m.

Ferguson said signing up for an appointment online was “somewhat of a challenge,” but he called the Volusia County Department of Health hotline and got help.

When asked if he was excited to receive his shot, Ferguson said, “Very much so.”

KATHY AND CO. — Edgewater resident Kathy Bricker took her parents, Gary and Winona Lingo, to the Deltona clinic. Bricker said her parents have taken the pandemic very seriously since it began in March. The vaccine right now is being given widely only to those age 65 and older, but Bricker, who is 57 years old, was also able to be vaccinated in Deltona because she is a caregiver for her parents. She said the event was “extremely organized,” and her mother, Winona Lingo, said she was very happy to be vaccinated.

Edgewater resident Kathy Bricker took her parents, Gary and Winona Lingo, both in their 80s, to the sports complex.

“It was extremely well-organized,” Bricker told The Beacon, while she and her parents sat in their parked car in the post-vaccination waiting area. Those who are vaccinated must stay on-site for about 15 minutes for medical monitoring.

Although the clinic was for those age 65 and older, Bricker, who is 57, also was vaccinated, because she is a caregiver for her parents. She said receiving a shot was a pleasant surprise.

Deltona residents Jorge Ubior and Maritza Rosado, ages 71 and 69, respectively, also got vaccinations. For them, all the people who have died due to COVID-19 complications were top of mind.

The two said they had no problem scheduling appointments, and were both looking forward to receiving their second shots in 28 days.

HEROES AT WORK — Volusia County paramedic Ali Bloom, left, and Department of Health employee Nicki Green prepare vaccinations before the Deltona clinic opens. Bloom, who has worked as a paramedic in Volusia County and Orlando through the COVID-19 pandemic, said the relief people were beginning to receive was exciting. “It’s a good day,” she said. “A great day.”

Tents staffed by Department of Health employees and paramedics lined the interior of the sports complex as drivers stuck their arms out of their car windows for vaccine shots.

“It’s an exciting day,” she told The Beacon.

Having experienced the fight against COVID-19 as a health worker, Bloom said she was happy to see some relief begin to come to people. The 37-year-old said she had never seen anything like the COVID-19 vaccine.

“My generation hasn’t had to see a huge vaccine rollout like mumps or polio,” she said.

FIGHTING FIRES AND VIRUSES — City of Deltona firefighters David Halpern, left, and Kevin Gallego were part of the emergency staff overseeing the vaccination event. Halpern said he was glad to see vaccinations going out. “We want to make sure the community is taking care of itself,” he told The Beacon.

After receiving their shot, vaccine recipients were advised to wait for 15 minutes under supervision of emergency staff in a staging area to ensure they had no allergic reactions.

While waiting, DeLandite Robbie Sumby told The Beacon that he expected far longer lines at the sports complex.

“It’s kind of a relief to get it,” he said of the vaccine. “I’m happy to get this started. I’m hoping it’s the beginning of a much better year.”

New Smyrna Beach residents Stephen and Loretta Sclafani also expressed their relief at being able to schedule appointments for vaccinations.

The couple said they saw the heavy traffic and camping along the side of the road before the Daytona Beach clinic and decided to wait for a clinic that allowed for appointments.

‘I COULDN’T AFFORD TO GET SICK’ — Mount Dora resident Jack Gage said he was happy he got the COVID-19 vaccine. “It took about an hour to get here, but it was worth it,” he said. “I’ve got cancer. I couldn’t afford to get sick.”

At 1 p.m. Thursday, Jan. 7, Volusia County spokeswoman Kate Sark said they were pleased with how smoothly the first of the two Deltona clinics was going.

While she could not say definitively, Sark said she expects, following the success of the Deltona vaccination events, that future events will operate on a similar registration system.

The Deltona clinic will continue at 9 a.m. Friday, Jan. 8, when another 1,000 vaccinations will be administered. Appointments for the Jan. 8 clinics are no longer available.

Information about future Volusia County vaccination events will be posted on the Department of Health website, here.