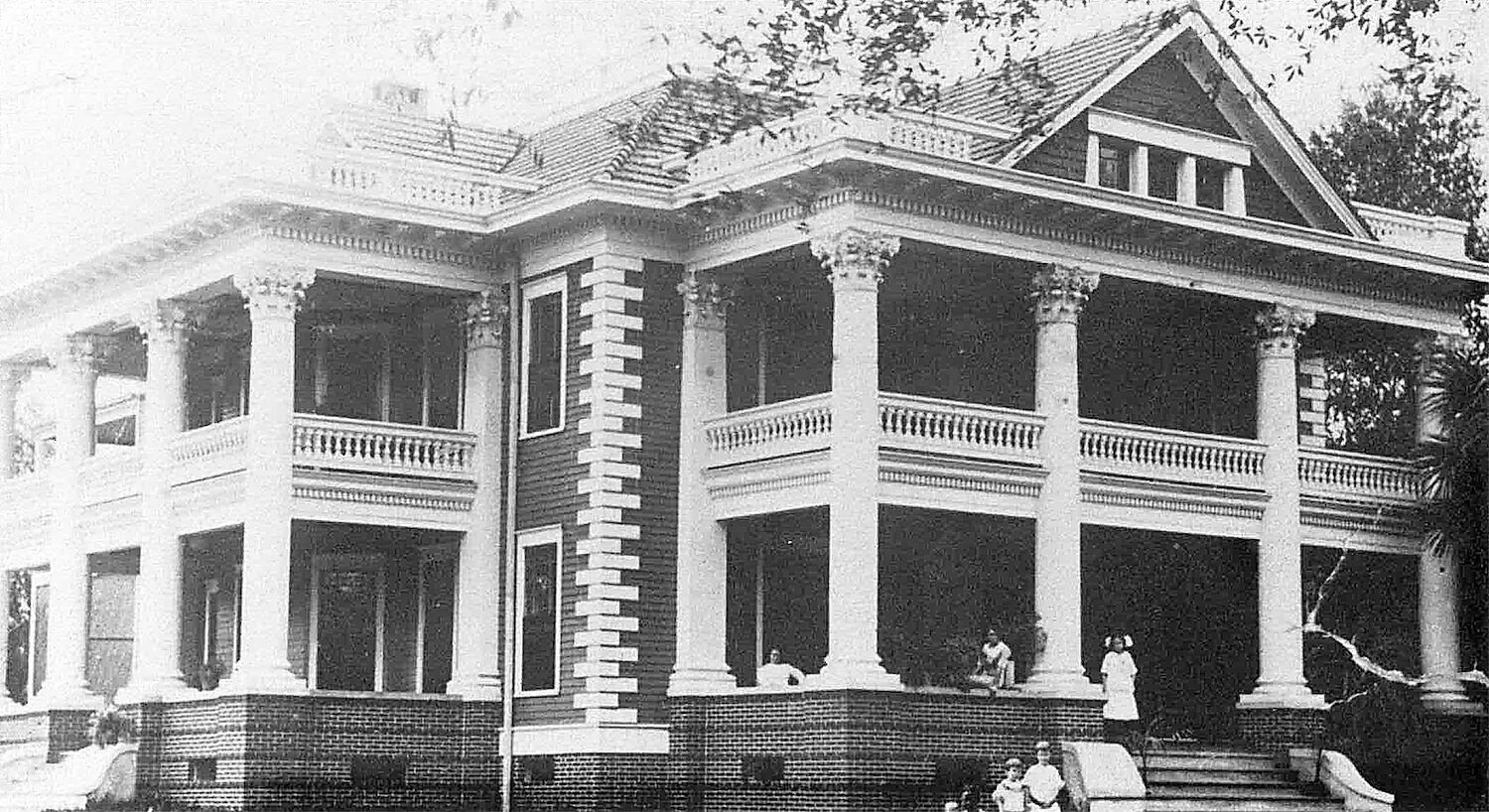 Editor’s note: As part of our West Volusia Memories series, Sally Bohon writes about structures that have disappeared over time. This is Part II of a two-part-series, click HERE to read Part I.

If you have memories from West Volusia’s past, we’d love to share them with our community. Send us 600 words or so via email to info@beacononlinenews.com

This week, we continue our exploration of DeLand area houses that have disappeared over the years, beginning with the home of the Landis family, whose members became DeLandites in 1901 when Dr. Forbes, Stetson University’s first president, hired Cary D. Landis from Indiana to help develop the Stetson Law School.

Cary and his wife, Margaret, arrived in DeLand with my father — Erskine Landis — an infant in Margaret’s arm.

The Landis home at the corner of New York and Clara avenues, built in 1907, was something of a showplace. It was a Queen Anne style with five bedrooms, five baths, four fireplaces and a wide porch with iconic pillars that wrapped around the front and both sides.

The interior was a masterpiece of mahogany hand carpentry. A Waterford crystal chandelier and wall sconces graced the formal dining room, which was painted to resemble a watery landscape.

Cary D. Landis went on to become state attorney general, so he and Margaret gave the home to their son and moved to Tallahassee where, after Cary D. Landis died in 1938, Landis Hall was named in his honor at Florida State University.

Facing the Landis home across West New York Avenue was the home of Sam Jordan, son of James and Martha Jordan. You don’t go back much further in DeLand history than the Jordans.

James was better known as “Captain James” for his service in the Civil War and for being captured by the North at the Battle of Gettysburg. The Jordans were here well before Henry DeLand made the scene, and both father and son filled about every post you can think of in the building of this town.

After Sam married Mary Frances Tanner in 1894, he built their home at 245 W. New York Ave. It was the most typical of Florida houses of that period: two-story frame with tall shuttered windows to capture the breezes, and a screened side porch with wicker rocking chairs. It fairly smacked of “Old Florida.”

Sam’s mom, whom we called “Aunt Mame,” sat on that porch rocking all day long, hailing those who passed her by. She was an institution on that corner, and nothing got past her eye.

Sam and Mary produced a son they named Raymond. Better known as Ray, he grew up to become a local attorney of the first rank, and among his partners over the course of time was Tom Jackson, who lived right across the street on the northwest corner of the intersection.

AND THIS ONE! — This is the Samuel D. Jordan House, a frame vernacular with stylish embellishments, that Sally Bohon describes as being at 245 W. New York Ave.

Ray Jordan later built a home over on North Amelia Avenue and had a daughter also named Ray, who became very well known as the Stetson law librarian, so it’s easy to get them confused.

The Jackson house was something else! The most Victorian-style house in town, on a dark winter’s night when all those moss-hung oaks caught the shadows of the old street lamps, it was downright spooky.

The Addams Family would have felt right at home here. With wrap-around porches and a round turret room that went up three flights, it was the house we kids most liked to “trick” on Halloween by ringing the doorbell and running like bats out of … .

It became such a tradition, I doubt the Jacksons minded very much. Anyway, the family was so full of attorneys they were well-covered.

The house had been built in 1902 for Warren Sr., who made his fortune in timber and turpentine, and then became vice president of First National Bank of DeLand.

Warren Jr. became our tax assessor. Ruby made her name as the society editor for the DeLand Sun News. And Katie married a fellow named Lawrence Cobb and they produced a son they named Warren (another Warren!) who outstripped them all by growing up to become a judge for the Fifth District Court of Appeal. The next stop on that particular subway is the U.S. Supreme Court.

It was, for three generations, a close-knit neighborhood of families. More than once, Erskine Landis gently prodded the Jackson boys off his porch and guided them home across the street after a night on the town.