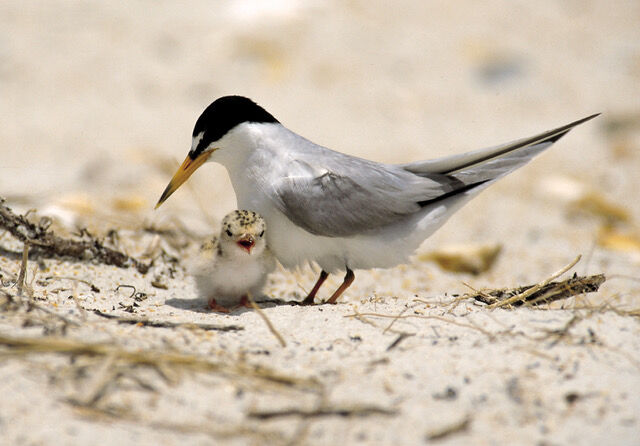 Love is in the air on Disappearing Island, and the results are on the ground – in the form of shorebird nests.

Several least tern pairs and four pairs of Wilson’s plovers have been discovered nesting on the popular boaters’ destination near Ponce Inlet. These small shorebirds have nested in multiple areas on the island’s sandy beaches. Shorebird nests have been documented on the island since 2014 when a colony reached its peak with over 60 nests on the sand. Unfortunately, most of those nests have had minimal success due to human activity and disturbances that caused the birds to abandon their nests.

Wilson’s plovers are sandy brown with a white underside and heavy bills. These solitary birds hunt fiddler crabs and are vulnerable to disturbances. With restricted ranges, they seldom wander far from ocean coastlines. They are a species of greatest conservation need in Florida. Eggs incubate for 24 to 25 days and then the chicks will learn to fly in 31 to 35 days.

Least terns, which are listed as a threatened species in Florida, have a grayish-white body and a black-capped head, narrow wings, yellow legs and a yellow bill. They tend to nest in colonies and are aggressive in defending their nests. Least tern eggs incubate for 19 to 25 days, and chicks learn to fly in another 19 to 20 days. The males on Disappearing Island can be seen courting females with tiny fish and a nest-scraping ritual that would melt any woman’s heart.

Since both species lay their eggs directly on the sand and the flightless chicks will run only on the sand until they can fly, they’re no match for frolicking people and playful dogs that can destroy a nesting colony in moments. If the adult birds are frightened, they may fly off and leave the eggs exposed to predators and prolonged sun exposure.

Because least terns are protected by state and federal laws, Volusia County’s Environmental Management Division has posted a barrier and Do Not Enter signs on Disappearing Island advising people and pets to stay out of the posted areas. This is where residents can help.

“If you see people entering the posted area or letting dogs running off leash in the vicinity of the posted area, gently let them know their actions may harm the birds and that the eggs laid on the sand are camouflaged and difficult to see,” advised Jennifer Winters, Volusia County’s protected species manager.

If they continue to disturb the birds, report their activities to the Florida Fish and Wildlife Conservation Commission’s wildlife alert hotline at 888-404-3922, #FWC or *FWC on a cellphone, or by texting Tip@MyFWC.com. Residents can also report unposted nests to the hotline.

Disappearing Island, which is accessible only by boat, appears during low tide each day as the water recedes in the inlet between Ponce Inlet and New Smyrna Beach.