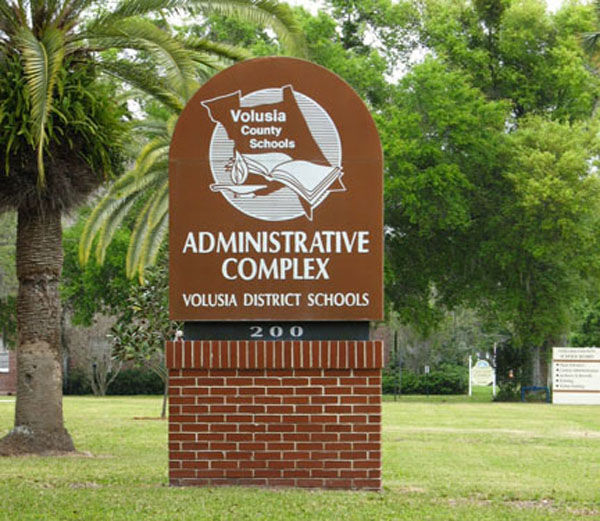 The Volusia County School Board recently recognized the winning entries in the 2021 Crime Stoppers Poster Contest. The Grand Prize winner for the 7th Judicial Circuit and the first-place winner in the elementary division was Kaylina Rodriguez, a third-grader at Enterprise Elementary School, with Destini Solano of Enterprise Elementary coming in second, and Isis De La Rosa Berrios of Friendship Elementary in Deltona taking third.

The Volusia County School District will face a district accreditation review in the spring of 2022 by Cognia, a nonprofit accrediting organization for K-12 schools. The goal of accreditation is to evaluate, verify and improve a school district’s quality. The process is an external audit of a district’s school-improvement processes and is conducted every five years.

All VCS stakeholders will be involved in the process, which will include review of documentation, surveys, interviews and walk-through observations at schools.

Woodward Avenue Elementary School in DeLand has announced the possible return of single-gender classes in kindergarten through third grade for the 2021-22 school year. If your child is attending Woodward in the fall and you would like your child to be considered for a single-gender class (all boys or all girls), contact the school. Applications are due prior to June 29, 2021.

The Woodward family would like to congratulate Cyd Snider on her retirement. She has dedicated more than 30 years to the school.

The Stetson University football team has a new head coach, Brian Young, who becomes the 10th head coach of Hatter football. Young had served as the defensive coordinator for the Hatters prior to going to his alma mater Georgia Southern University a year ago.

Previously at Stetson, Young also worked with the special teams and was the staff liaison to pro scouts and to postseason all-star games. He also has coached at Cornell University, as well as spending some time coaching in the NFL.

After 25 years at the helm of the Stetson University softball program, head coach Frank Griffin has announced his retirement. He compiled a record of 761-552 during his quarter century in the Stetson dugout. This included 20 appearances in ASUN softball tournaments, two regular-season titles, two conference tournament championships and the program’s first two appearances in the NCAA Tournament.

Griffin was inducted into the Stetson Athletics Hall of Fame in 2014. His 32-year coaching tenure had him amassing 981 career victories.

The Stet son women’s rowing team, which placed third in the Metro Atlantic Athletic Conference Championships, had 14 student-athletes named to the MAAC Women’s Rowing All-Academic Team. To be eligible for the team, a student must complete two semesters at their institution and hold a cumulative grade-point average of 3.20 on a 4.0 scale.