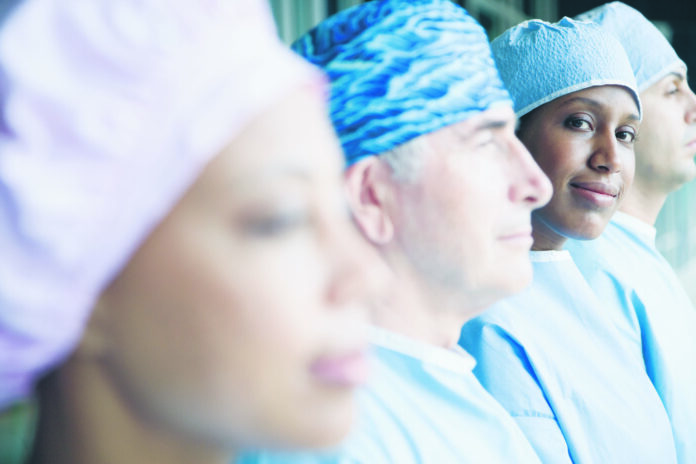 For Volusia County health care workers, the COVID-19 pandemic is a daily battle with life-and-death consequences.

The struggle has continued for 17 months, and last year’s frequent celebrations of health care heroism have disappeared.

These workers on the front lines are tired, and they have a message for us: This ends only if we all work together.

The Beacon spoke with two doctors on the front lines who shared stories of exhaustion and frustration.

And, about what it takes to finally end the pandemic: teamwork.

“This is never going to go away if we don’t do this together,” one doctor told us. 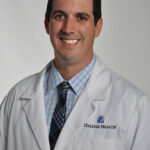 “There’s a profound exhaustion that is really characteristic of this wave,” Dr. Stephen Viel told The Beacon. For three years, Viel has been the medical director for emergency services for Halifax Health.

Nothing about the job has been easy during the pandemic, Viel said. But the current surge — what he referred to as the fourth wave — is different, he said.

In the early months of the pandemic, gratitude and celebrations for health care heroes were commonplace.

“There was a lot of community support and admiration for health care workers at that point,” he said.

That has faded, although the work has gotten harder.

“Objectively the number of people we are seeing sick is nearly double what it was at previous peaks,” Viel said.

While hospitalizations are higher and staff is stretched thin, there has been progress.

“On the one hand, we have more supplies,” Viel said. “We’re not in danger of running out of PPE; health care workers have the opportunity to be vaccinated; but people are exhausted. There’s not the same sentiment that there was before as far as the enthusiasm and the support. I think everyone is just tired.”

The whole notion of health care workers being heroes, he said, is being rethought.

“Heroes sacrifice everything and can’t be tired or exhausted, and they’re not human,” Viel said. “There’s much more of a recognition that it’s a nice sentiment, but it leaves people with less opportunity for mental wellness or permission to take a break.”

The Beacon asked Viel what moment would stick with him once the pandemic was finally over.

“I remember, at the very beginning — when it was really bad in New York, no one knew what was going to happen and Florida first closed down — we were trying to find out what to do. My wife’s an ER doctor, and we have two kids, 3 and 6. Her parents do a lot of the child care. We had decided then that we were just going to have the kids stay with them. We weren’t as worried about the kids, but we were worried about passing it on to her parents. We had them stay with them for two weeks. There was such a high amount of anxiety, a high amount of fear. Nobody knew how it was going to go. You just saw the pictures coming out of New York and Italy, like ‘Oh, my God.’”

Viel’s message to anyone who will listen? If you aren’t vaccinated, now is the time to reconsider so we can chart a course out of this pandemic.

“I think that’s the biggest thing we can do to reduce hospitalizations and deaths,” he said.

Viel continued, “I think we can do both. I think the vaccine is the biggest thing we can do to reduce the risk on the health care system. The other thing is to be compassionate.

Everyone’s had a tough time.”

The Beacon is honoring the doctor’s request to not be identified, because of the divisiveness surrounding aspects of the pandemic, such as masking and vaccination.

As the delta variant of COVID-19 has become more prominent, more children are being infected. As of Aug. 13, only two of 151 COVID-19 patients hospitalized in the Halifax Health system were children.

The pediatrician we spoke to wonders how long that will last, now that schools are back in session with masks optional for students.

“I will be very surprised if the schools are able to stay open,” the doctor said. “We’ve seen kids test positive throughout the entire pandemic in spurts. It was pretty much here and there, but we weren’t overwhelmed with kids coming in sick. In the last month, it’s been overwhelming.”

Children get sick more often than adults and are not always able to articulate their symptoms, so telling COVID-19 apart from the common cold isn’t always easy.

“It’s very hard to tell without a test who has COVID and who doesn’t,” the pediatrician said.

The end of summer is already a busy time of year for pediatricians, as they handle back-to-school physicals. An increased number of patients coming in with COVID-19 has led to a strain.

“It’s been really exhausting to take care of all these sick kids. Then you go on social media, and you see friends in total denial,” the doctor said. “Our hospitals are full. Our ICUs are full. It’s like, why don’t people understand this?”

Not only COVID-19 patients are at risk when hospitals are strained. Wait times for patients, suffering from COVID-19 or not, is much higher than normal.

“The scary part right now is, if you have a heart attack, or appendicitis, or you’re in a car accident, you’re going to have a hard time getting into the ER. Our health care is so stretched to its limits, and then to go out and just see nobody cares, it’s been really frustrating,” the doctor said.

Their message to people? Mask up and keep your community safe.

“Public health, it’s a community effort. The individual has to put aside their wants and needs for public health when it’s a crisis,” the doctor said. “This is never going to go away if we don’t do this together.”

Where has all the data gone?

Just as the delta variant of COVID-19 has caused numbers to soar, tracking those numbers has gotten more difficult.

Until June, the Florida Department of Health issued daily COVID-19 case numbers. Then they didn’t.

Information now comes from a mix of sources — hospital systems, the Centers for Disease Control and Prevention, and the state’s weekly counts that are released on Friday evenings. Reports of cases sorted by city have disappeared.

On top of that, state and federal health officials appear to be arguing about the data that is available.

On Aug. 9, the official Twitter account for the Florida Department of Health called out the CDC for an error in reporting new COVID-19 cases from Aug. 6-8. The CDC fixed their statistics, reducing the previously reported figures.

Originally, the CDC reported Aug. 8 that 28,317 new cases were added — a number The Beacon also reported in last week’s edition. That was reduced to 19,564, a number the state still claims is incorrect.

In 2020, while there were many unknowns about the COVID-19 pandemic, the state Department of Health’s COVID-19 dashboard provided detailed daily breakdowns by county, with information about hospitalizations, the number of tests conducted, and the number of new cases. The American Health Care Association operated a dashboard, too, that illustrated the number of intensive-care beds available in each county and how many were occupied.

But now, with more COVID-19 cases and hospitalizations than ever before, the data is less consistent and less detailed.

Health care workers could help clarify the situation, but many are afraid to speak out for fear of possible retribution.

One doctor to whom The Beacon spoke for this story wanted to remain anonymous to avoid a flood of negative online reviews that might be posted maliciously by those who still claim the pandemic isn’t real.