Get tickets now for a day of entertainment

The “Thin Man” Watts Jazz Fest returns to DeLand for 2022, with a stellar musical lineup and a new place on the calendar.

After the 2020 and 2021 events were canceled because of the COVID-19 pandemic, the decision was made to change the date to February — Black History Month, and the birth month of Dr. Noble “Thin Man” Watts, for whom the festival is named.

The Jazz Fest will host its annual celebration of jazz, blues and gospel music Friday and Saturday, Feb. 11 and 12.

This 10th edition of the annual event will feature six acts on two main stages: Cafe DaVinci at 112 W. Georgia Ave. in Downtown DeLand, and the Noble “Thin Man” Watts Amphitheater at 322 S. Clara Ave. The stages are within walking distance of each other, and pedicab rides will be offered (for tips!) between the stages, courtesy of DeLand Cyclery.

Reflecting the history of jazz and gospel music as an intersection between Black and white musicians and communities, one goal of the “Thin Man” Watts Jazz Fest is to celebrate progress in uniting these two groups over a shared musical heritage.

Another goal is to raise money, for the African American Museum of the Arts, the MainStreet DeLand Association, and the Watt -Greenlee Scholarship for music students at Daytona State College.

About the ‘Thin Man’

Born in DeLand on Feb. 17, 1926, Noble “Thin Man” Watts made his way to the exploding New York City jazz scene via Florida A&M University, where he played in the school’s famed marching band with the likes of Cannonball Adderly.

In 1952, Watts played in the house band for the TV show Showtime at the Apollo and, in the late 1950s, he lent his wailing, bluesy tenor-sax style to traveling jazz bands for shows headlined by Chuck Berry, Jerry Lee Lewis, Buddy Holly and the Everly Brothers, to mention a few.

Watts also was a solo artist, recording the R&B instrumentals “Easy Going” and “Flap Jack,” among others.

After traveling the world with his horn, Watts returned to DeLand, and collaborated during the 1980s with musician and producer Bob Greenlee. In 2000, Stetson University bestowed an honorary doctorate degree on Watts, and the city named an amphitheater in his honor, across the street from the African American Museum of the Arts at 325 S. Clara Ave.

Watts died in 2004 and is buried in Union Cemetery in DeLand. He is survived by a daughter, Natalie Watts Brown, who lives in DeLand.

A kickoff party 6:30-8 p.m. Friday evening, Feb. 11, will take place at the Watts Amphitheater, and admission is free. This party, which will include free food and drink, will be the last chance for fans to purchase $15 tickets to the Jazz Fest. Tickets will cost $20 on Saturday.

Acts this year include familiar Jazz Fest fan favorites and newcomers who are sure to become favorites: The Vibe Band, Sybil Gage and her Catahoulas, the Adam Kornecki Trio, ChicknSoup, Sage and the Joe Gilabert Quintet featuring Dan Jordan.

L.I.F.E., a gospel chorus directed by Dee Henry, will open the festival at noon Feb. 12 on the north (Indiana Avenue side) steps of the Historic Volusia County Courthouse, 120 W. Indiana Ave. in Downtown DeLand. This concert is also free.

After the gospel-choir performance, a New Orleans-style “second line” parade will lead the crowd to Cafe DaVinci nearby. Festival tickets and T-shirts will be available at both the kickoff party and the gospel-choir concert.

Following the day of music, at least two Downtown DeLand venues will host Jazz Late Night: Sidecar Home Market & Bar at 100 S. Woodland Blvd., and Abbey Bar at 117 N. Woodland Blvd. Check the Jazz Fest website at www.wattsjazzfest.com for the hours for jazz music at these two locations — and don’t be surprised if musicians from the festival show up to sit in.

All proceeds from this year’s event are dedicated to the Jazz Fest beneficiaries: the African American Museum of the Arts in DeLand, the MainStreet DeLand Association and Daytona State College’s Watts-Greenlee Scholarship. 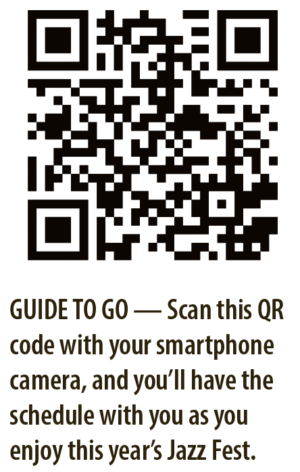 Sybil Gage and her Catahoulas, a Cocoa Beach-based group presenting vocals and jazz standards in a New Orleans style