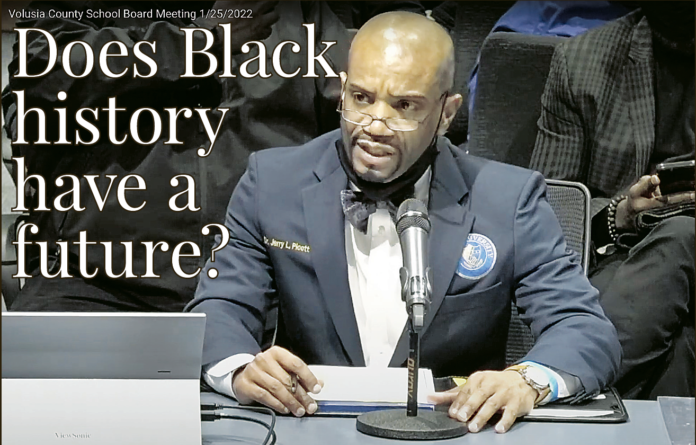 As Black History Month dawns, could a proposal moving through channels in the Florida Legislature end the teaching of Black history as we know it?

Local Black leaders took to the mic during the Volusia County School Board’s Jan. 25 meeting to ask the School Board to make sure that doesn’t happen.

A bill, titled the “Individual Freedom Act,” passed its first hurdle in the Florida Senate in January.

The proposed legislation, Senate Bill 148, addresses controversy over critical race theory, a graduate-level academic idea of racism as a social construct embedded in U.S. society and legal systems. The bill pushes back against this academic idea by prohibiting workplaces and public education from violating certain “principles of individual freedom.”

Included in the principles are “No individual is inherently racist, sexist, or oppressive, whether consciously or unconsciously,” and “An individual should not be made to feel discomfort, guilt, anguish, or any other form of psychological distress on account of his or her race.”

The bill helps codify Gov. Ron DeSantis’ proposed “Stop W.O.K.E. Act,” and would allow legal action against schools and workplaces if they teach or train anything that violates those principles — which some fear could include unpleasant facts about race relations in the United States’ history.

Although the phrase “critical race theory” is not included in the language of SB 148 (and although its teaching is already specifically banned in Florida public schools), it is explicitly mentioned in the bill analysis, a document given to the senators ahead of a vote.

“I’m appalled — I found it to be a runaround of the main issue at hand, which was a way to ban or exclude the teaching of Black history in the public schools,” the Rev. Dr. Victor Gooden, of New Life Church Ministries in Daytona Beach, told the Volusia County School Board. “It feels as though chains have been put back on us, and we are not receiving true privileges of citizenship in America.”

Like others who spoke at the meeting, retired judge the Honorable Hubert Grimes, the first Black judge in Volusia County, worried that SB 148 would negatively impact Black history education in school.

“Throughout the country, there are people who don’t have a clue nor understand, but are using this phrase as a red herring to launch an attack, not just on critical race theory, but really on teaching Black history,” Grimes said. “This is wrong, and it has to stop. How or why should secondary schools be barred from teaching something they never taught, anyway?”

“Is the banning of Black History Month next in America’s schools? Will it be watered down? Will it be reduced to nothing? This will teach us to be intimidated from teaching it,” Daytona Beach NAACP President Cynthia Slater told the School Board. “A wise nation shows reverence, and learns from its past. It does not let the most significant facts about our shared and collective memory disappear into the pit of forgotten history.”

Dr. Jerry L. Picott, a former principal in Volusia County Schools, said the arguments were about the truth.

“All of this is really about truth … Let us all be reminded that some aspects of America’s truth can be painful for most of us,” Picott said. “Our kids need the opportunity to learn history and understand the details, investigate critical moments and analyze their own thoughts and conclusions. The truth would, indeed, set us free.”

“We speak that there is a gap in education. I believe that gap is history,” Dr. Kennedy Jacobs, president of the Urban Chamber of Volusia Flagler Counties, said. “Let me tell you why history is important.”

Jacobs told the School Board that he was driving in Washington, D.C., in 2011, after registering for a master’s degree program at Howard University, when he was pulled over by a SWAT team.

“As a potential student, I sat on the curb in broad daylight crying, asking myself, why am I sitting on this curb? A pastor, getting ready to go to college, and they are accusing me of being a drug dealer because I look like a person of color,” Jacobs said.

“Our fear of hearing or teaching history will cause us to repeat history,” Jacobs cautioned the School Board.

The School Board appeared to be somewhat taken aback, and only briefly addressed the issue in their final comments of the meeting.

“My heart’s a little broken, because I’m not sure what happened that made these individuals think that we are going to take history out of our classrooms,” Board Member Jamie Haynes said. “I’ve never said that, and I have never heard any of you say that.”

At press time, SB 148 was being considered by the Florida Senate Committee on Rules. If passed there, the bill would head to the Senate floor for a vote.