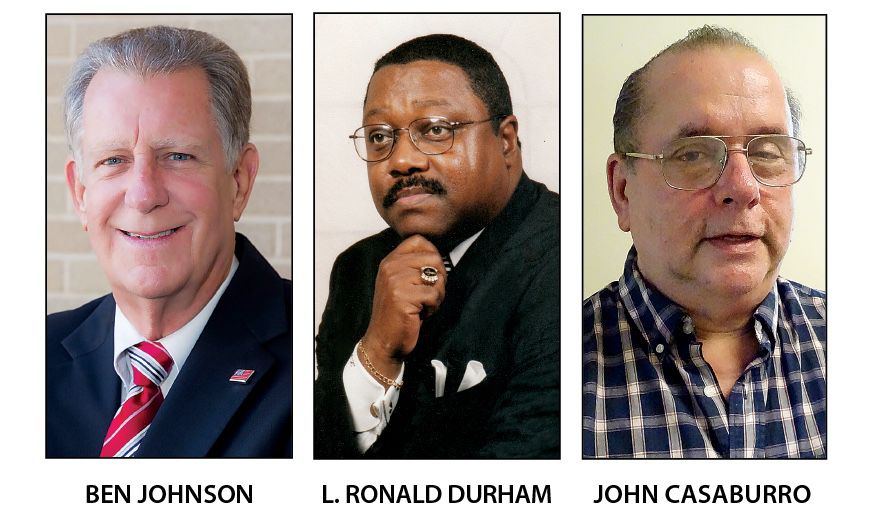 A retired white Republican sheriff, an African-American pastor who’s a Democrat, and a Republican Party activist and retired painting contractor go into a bar. The sheriff pulls out a fistful of cash.

Wait, they didn’t go into a bar. They’re on the ballot together, each hoping to win one of the highest-profile elected positions in Volusia County — the at-large seat on the Volusia County Council now held by Joyce Cusack, who has served the maximum allowed terms.

Well, sure, John Casaburro, a former district coordinator for the Volusia County Republican Executive Committee, would like to win, but he’s realistic. He’s a write-in candidate without much name recognition or money in his campaign account.

Casaburro will be happy, he said, if he draws enough votes to prevent Ben Johnson — the other Republican — from winning.

The third man in the race, Dr. L. Ronald Durham, is a Democrat.

“I have nothing bad to say about a pastor,” Casaburro explained.

Casaburro has a long-standing dislike for retired Sheriff Johnson, dating back, he said, to his treatment when he complained about drug dealers in his and others’ neighborhoods.

“We don’t get enough help as consumers,” Casaburro said.

Johnson said he entered the race at the urging of friends, and because he had worked his way through the honey-do list that greeted him at retirement two years ago.

“I’m still young enough. I’ve got a lot to give,” Johnson said. “I miss being mentally busy.”

“I have a history of doing the right thing,” Johnson said.

Casaburro filed to run late in the game, and hasn’t yet been required to report contributions.

For those concerned about keeping a geographic balance of representation on the County Council, all three men are from West Volusia. Johnson lives in Glenwood, Casaburro in DeLand and Durham in Deltona.

Durham’s career has been in East Volusia, so he’s sometimes mistaken for an east-sider, but he points out that many of his professional roles have been countywide, which gives him the ability to help pull the county together.

“The way we’re going to be able to move forward is with a County Council that knows how to work together,” Durham said. “My whole career, I’ve been a consensus-builder.”

Despite the partisan overtones, the election is nonpartisan. All registered voters in Volusia County may cast ballots in the Tuesday, Aug. 28, primary.

Casaburro’s name won’t be on the ballot. His supporters will need to note the correct spelling, and write it in the blank that will appear below Durham’s and Johnson’s names.

If none of the three men wins a majority of the votes cast Aug. 28, the top two will move on to a runoff Tuesday, Nov. 6.

The at-large seat is one of two positions on the seven-member County Council that are elected countywide. The other is the county chair, held currently by Ed Kelley of Ormond Beach and not up for election this year.

The remaining five seats represent specific geographic areas of the county, and are elected by voters in those districts.

Three of those seats — including District 1 and District 5, the two seats covering West Volusia — are up for election this year, and will also be on the ballot Aug. 28.

Four of the people he tried to help died, he said, before they could access the services they needed to save their lives.

With some of the highest taxes among counties in Central Florida, Casaburro wonders, why isn’t Volusia County able to provide the services its residents desperately need?

“Everywhere I go, people have had problems with the county,” he said.

“We’re not getting our money’s worth,” he said. “There’s corruption in this county on many levels.”

Raised a Catholic in New York, Casaburro now attends St. Peter Catholic Church in DeLand, but also attended First Baptist Church for its Bible-study classes, and led the singles ministry there for a time.

He was catapulted into activism in 1993, when he was a divorced father struggling to get custody of his children at a time when custody for fathers was rare. He became one of the founders of the Fathers’ Rights organization, and he did win full custody of his daughter and son, who are now grown.

“That’s how I got involved in politics,” Casaburro said.

Later, he said, he helped other fathers win visitation rights, an activity that taught him how the court system works.

He moved to DeLand in 1996, having retired from his career as a painting and restoration contractor in New York, a business that caused him to meet then-real-estate-developer, now-President Donald Trump.

In Volusia County, he became active with the Republican Party, and he has several framed certificates and awards for his work on behalf of the party.

Casaburro has never before sought elected office, he said, but his concern about corruption motivated him.

“I’ve never been a politician; I’ve always been an activist,” he said. “This time around, I’ve had enough.”

He’s especially hoping to prevent the election of retired Sheriff Ben Johnson, with whom he tangled over an effort to eradicate drug-dealers. Casaburro is committed to standing up for the little guy, the one without money to hire an attorney or to buy influence.

“It’s hard to fight the county without a lawyer,” Casaburro said. “You get stuck, unless you have all kinds of money.”

Casaburro qualified as a write-in candidate, avoiding the $1,785.46 qualifying fee required of County Council at-large candidates. When he decided to jump into the race, it was too late to avoid the fee by collecting petition signatures from hundreds of voters.

Casaburro said people like the fact that he’s a write-in candidate, running a low-budget campaign. He’s doing as much legwork as he can, attending events and talking with voters, and he plans to spend campaign cash only on signs, fliers and newspaper ads — not the expensive, glossy mailers many candidates use.

For a long time, Dr. L. Ronald Durham has been bringing people together to bring about change.

In the 1970s, after a racial-profiling incident on the New Jersey Turnpike, Durham joined other pastors, walking shoulder-to-shoulder, to shut down the five-lane highway.

“We made our point,” Durham said.

The activity launched him into the civil-rights movement and helped him make the first of what are now dozens of close connections with national civic leaders, celebrity athletes and political figures.

“Dr. Durham’s cellphone directory reads like ‘Who’s Who in America,’” editor Theresa Jordan wrote in a profile of Durham published in the June edition of Triumphant Magazine.

After Trayvon Martin was killed in 2012, Durham was a force in organizing a rally in Sanford that was attended by 33,000 people from across the nation.

“I put the entire ground game together,” Durham said.

A resident of Deltona, Durham for 15 years pastored Greater Friendship Missionary Baptist Church in Daytona Beach, growing the church and its budget from $200,000 a year to over $1 million a year during his tenure, and guiding construction of the church’s $1.1 million Friendship Academy School.

He also served as a moderator for the denomination, assigned to work out problems in a 75-church district.

“My role was to go in and work out whatever difficulties they had,” Durham said.

Now he wants to put his skills to work in the at-large seat on the Volusia County Council.

“I’m in it to make a difference,” Durham said. “I want to focus on our county.”

High on the agenda, he said, is building a work-together attitude among County Council members and hiring a county manager who understands he or she works for the elected officials, not the other way around.

“Unfortunately, it got to the point where our former county manager felt that he was able to do things unchecked,” Durham said.

Following that, a hard look at impact fees. Volusia County has a strong track record of success, and need not fear that higher fees will slow growth, he said.

Development should pay its fair share, Durham said, so Volusia County can move forward with the road-paving and bridge-maintenance projects that are needed.

He also wants to take another look at asking voters to approve an additional half-cent sales tax, an idea that was abruptly shelved this year by the County Council after all the county’s 16 cities endorsed it.

Durham said he doesn’t recall ever before seeing such universal agreement on a way to pay for water-quality projects, infrastructure, transportation and other needs.

He would like to see more attention paid to his hometown of Deltona, which needs help creating the infrastructure that will enable commercial and industrial development to bring jobs and a healthy tax base.

Finally, Durham looks forward to seeing the fruition of projects he has long worked on to help the homeless, and to helping the County Council work to fix problems in the county ambulance service and Medical Examiner’s Office.

After retiring from a long law-enforcement career that finished out with 16 years in a high-pressure elected office, why would 68-year-old Ben Johnson throw his hat in the ring for yet another high-pressure office just two years later?

He says it in that self-effacing, laid-back drawl that endears many to the DeLand native who handily won election to four four-year terms as Volusia County’s sheriff — the last two times with more than 73 percent of the vote — and the style that propelled him to positions like president of the Florida Sheriffs Association in 2011.

The encouragement of supporters was part of the reason Johnson decided to enter the County Council at-large race in October 2017. The other part was finding out retirement wasn’t, well, wasn’t enough.

Johnson said he had been in a position to help people — as a sheriff’s deputy and then as sheriff — since 1971. After finishing a list of retirement projects, including building a garage and then rebuilding and running the Farmton Hunting Club, Johnson began to miss a deeper mission.

“You get out, and you wake up, and you’re not able to help anyone,” he said. “I knew I could do good. I’ve got a lot left in me. I know the county; I know our problems. I’m a problem-solver.”

Johnson is raring to go on the County Council. He wants to help heal the dissension in county government that arose during the waning months of County Manager Jim Dinneen’s tenure.

Similarly, Johnson notes, he led the Volusia County Sheriff’s Office from a time of discord to a time of cooperation and effectiveness.

He wants to encourage smarter growth.

Johnson is in favor of a good, hard look at impact fees as a way to make residential development pay more of its own way.

With the public-private economic-development partnership of Team Volusia, along with five colleges and five airports, Johnson said, Volusia County has a lot of assets. It may need a better sales pitch.

“Volusia County is late to be discovered,” Johnson said. “It’s up to us to bring it to the forefront.”

That will require, he said, cooperative partnerships with Volusia County’s 16 cities and with private enterprise.

“The county needs to start working better with the cities,” Johnson said. “You’ve got to make sure the cities feel like a partner, and not a tag-along.”

The county’s struggling ambulance service is another priority.

“This is not something you put on the back burner,” Johnson said. “It’s not going to cure itself.”

Johnson counts among his strengths his experience as an administrator of the Sheriff’s Office and its budget, which he managed during the Great Recession, but also his in-depth knowledge of the county and a proven ability to work with others.

“I’m a people person,” Johnson said. “I know this county inside and out. There aren’t many roads in this county I haven’t ridden on, and not many woods I haven’t been in.”