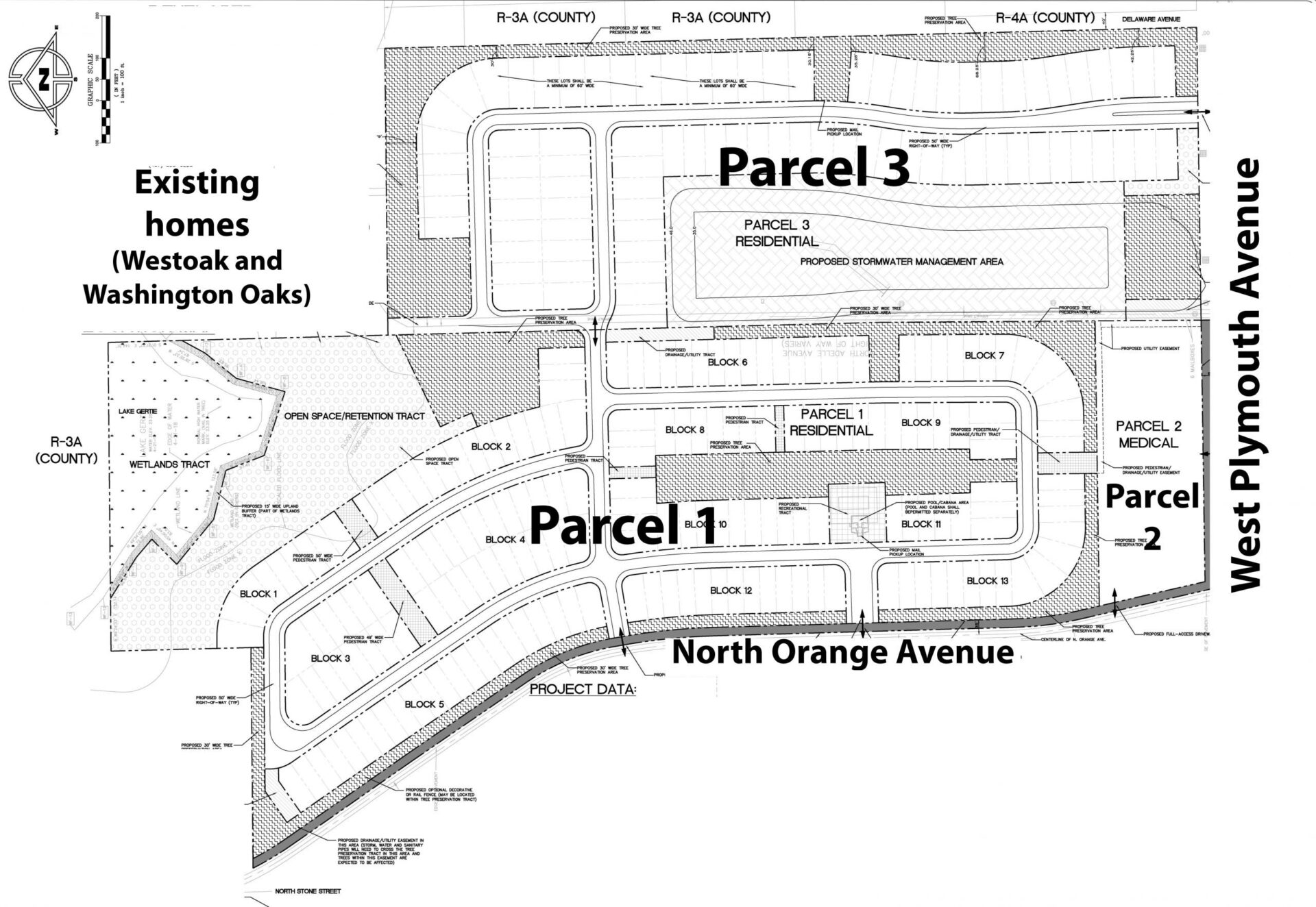 Plans for a new community that could bring as many as 272 new homes to a vacant site near DeLand’s hospital have moved forward, despite ongoing concerns from some neighboring residents.

The DeLand City Commission unanimously approved an ordinance rezoning 79 acres of land on the north side of West Plymouth Avenue, and east of North Orange Avenue, for Lincoln Oaks, a residential development that includes space for new medical offices.

In a rare show of compromise between developers and existing residents, many concerns expressed by residents living in the large-lot Westoak and Washington Oaks neighborhoods had been worked through before the meeting.

One of those concerns was the developer’s plan to close North Adelle Avenue; the agreement now calls for the developer to replace the access road.

Attorney Alex Ford represents many, though not all, of the incumbent residents, while Mark Watts is counsel for Elevation Development, the Orlando-based firm behind Lincoln Oaks.

“They’d love to have this project not occur,” Ford said of his clients. “Let’s not pretend they’re enamored with the project. But they understand people have private-property rights.”

As it currently stands, the project includes 272 single-family lots of varying sizes, with the smallest 38 feet wide and the largest 60 feet wide.

The project is partially within DeLand’s medical-services overlay district, a special planning designation intended to encourage development that complements the hospital and medical offices near the corner of Plymouth Avenue and Stone Street.

Watts said he has worked with city planning staff and Ford’s clients to mitigate many of the existing residents’ concerns. Among other concessions, the developer agreed to a minimum 1,400-square-foot home size.

In addition, some existing wooded areas close to the existing neighborhoods will be preserved as buffers, and no pedestrian trails through them will be allowed within 50 feet of the property boundary. No more than four lots, which must be at least 60 feet wide, can be built along part of the project’s northern boundary.

Much of the contention over the project stemmed from the developer’s request to abandon North Adelle Avenue, north of West Plymouth Avenue — the main access road to Westoak and Washington Oaks.

To assuage residents, the developer will be required to build a new connecting road between the existing neighborhoods and North Orange Avenue, which runs alongside the project’s western boundary. The developer will also provide an electronic access gate.

The power lines that currently serve the existing residents will be moved underground, as well, as part of the agreement.

There remains disagreement about how many homes should end up on Parcel 1, which is intended to be the denser portion of the project.

“Really the only issue we want to talk about tonight is the number of lots on Parcel 1. The developer proposes 188,” Ford said. “Based on the Parcel 3 density, which we think is a pretty good density, we suggested the appropriate density on [Parcel] 1 would be 130 units.”

The two attorneys asked the City Commission for guidance, but commissioners were reluctant to suggest an exact number.

“I think it would be unwise to say it’s got to lose 29 lots,” Mayor Bob Apgar said. “I think we need to provide some measure of guidance, for both the neighbors and Mr. Watts and his client, and all of our staff, we need to say we’re looking for a 5- to 7-percent or 5- to 10-percent reduction in lot numbers.”

Vice Mayor Charles Paiva said he trusted the two attorneys to come to a reasonable compromise.

“Mark and Alex are well-versed and trained in this, and understand, and they can count. So if Mark comes back with 271 [units in total, versus the 272 currently proposed], he understands that there’s not going to be a very supportive vote. So, I’ll leave it up to Mark’s ability to count and figure it out.”

Watts, for his part, said his client had already conceded a fair bit of density in the project.

“We did, in our mind, reduce the density when we had gone from 349 [units] when we maintained the townhomes in the mix, and we [got rid of] that, and it reduced the overall quite a bit,” he said.

In the end, the five commissioners all voted to rezone the property and let the project move forward on first reading, with the understanding that Watts and Ford would agree to some kind of compromise on the number of lots by the time the project comes back for its second and final reading.

Just before the final vote, Apgar, concerned the City Commission’s instructions to the city’s planning staff were still too vague, checked in with Planning Director Mike Holmes.

“Mike, I mean, do you feel like from the commentary and discussion, that you’ll be able to work with Mr. Watts and Mr. Ford in wrapping up the details?” he asked.

“Just working with three lawyers [including DeLand City Attorney Darren Elkind] is already scary enough,” Holmes said, to much laughter, before answering in the affirmative.

“For us too,” replied Ford, from the audience.