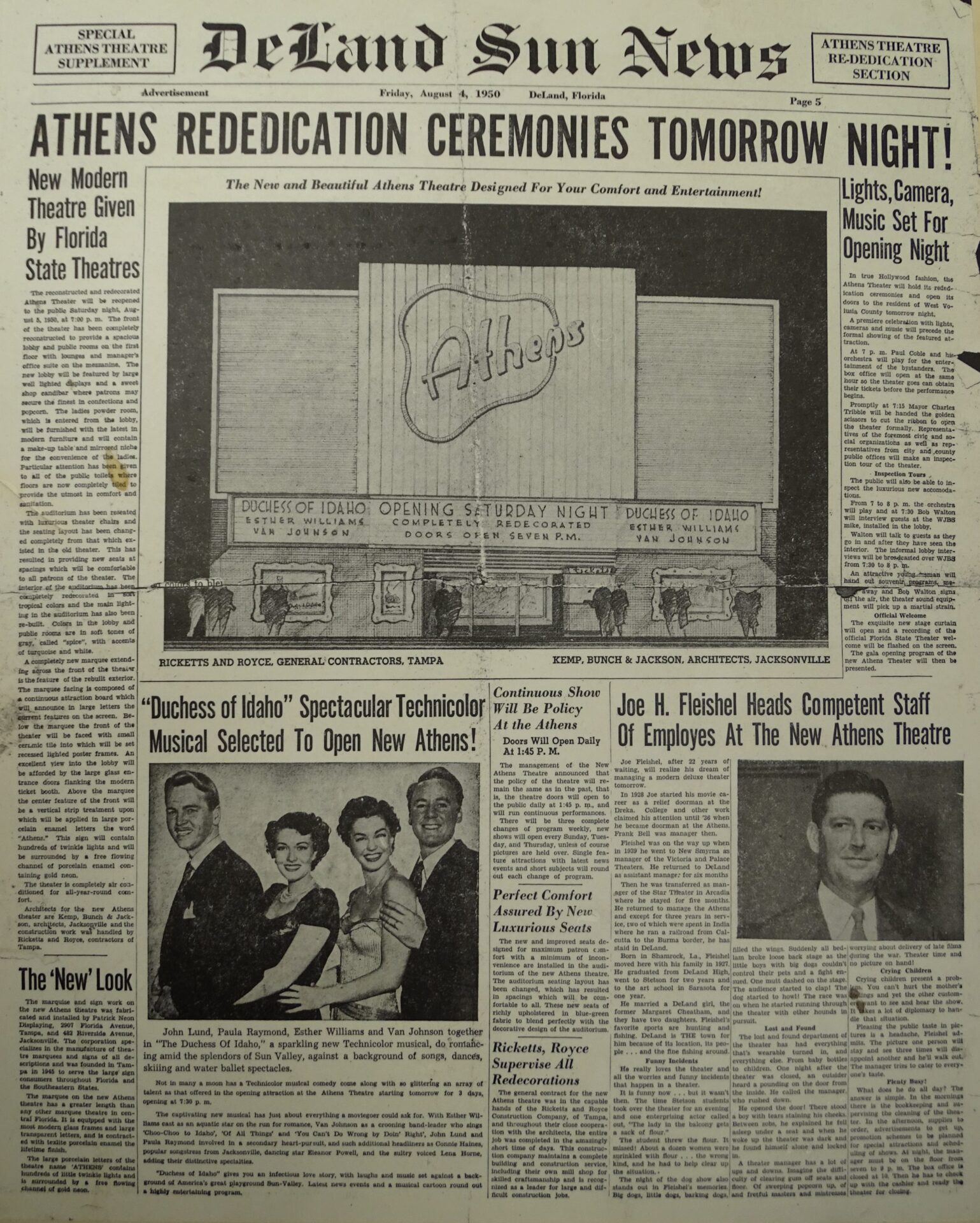 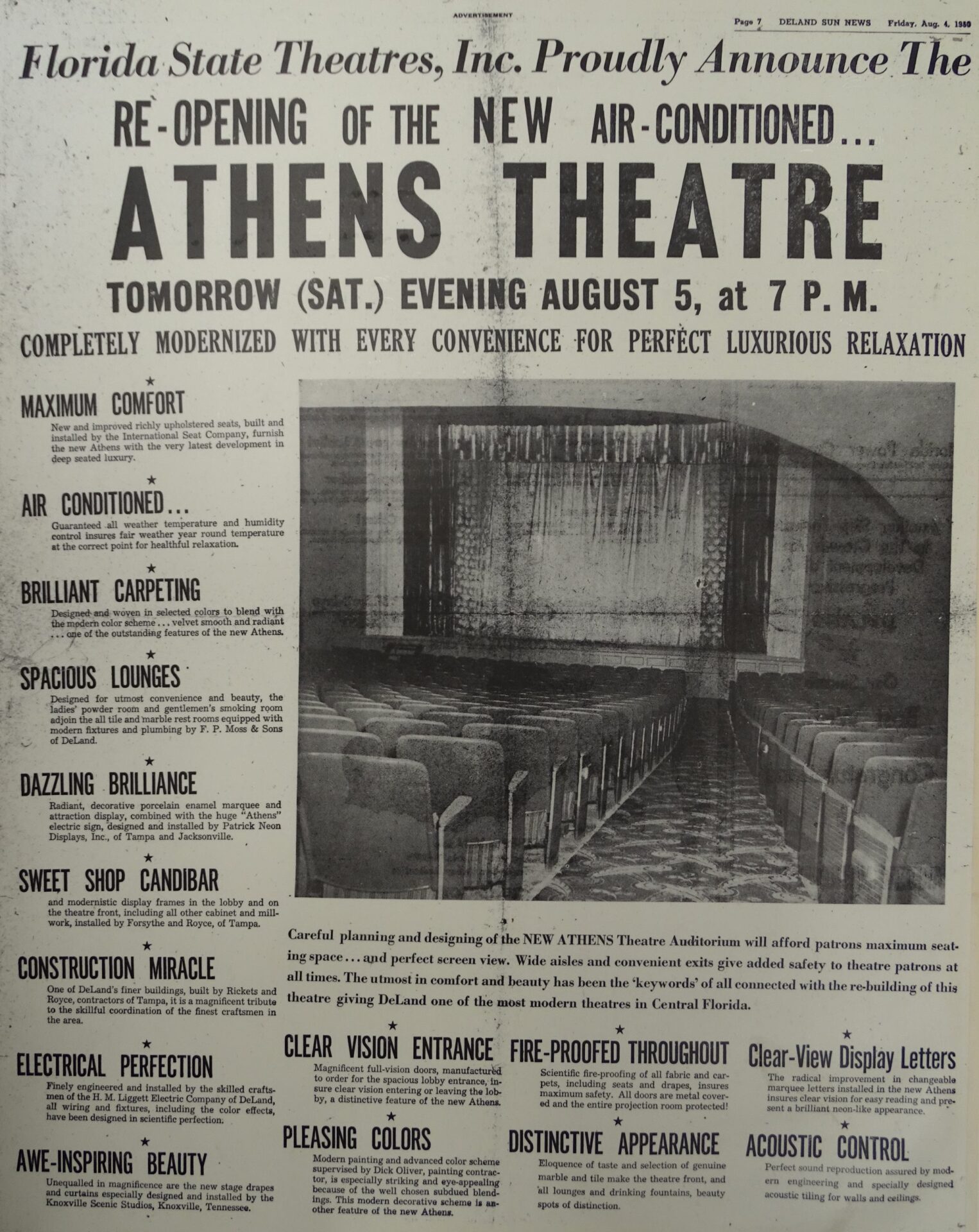 It was the early 1960s in DeLand, and entertainment options for kids were slim. The main activities for young boys were pickup ballgames, building forts, and playing war. Air potatoes and oranges made great hand grenades. (Both are now in short supply.)

TV was very limited: just three channels, and viewing times were restricted because parents believed the TV would rot our brains. They were right. If reality TV had been around then, many of us would barely be able to hold a spoon.

It was a healthful lifestyle, with plenty of fresh air, physical activity and dirt. Lots of dirt. Not a hand sanitizer in sight.

Since school took up most of the weekdays, parents had to manage us only for a couple of hours each day — except on Saturday. Unless some activity was planned, young kids bounced around the house, much to the annoyance of their parents.

Through all of this was a shining glimmer of hope for Dad and Mom. It came in the form of the Athens Theatre.

Today, the Athens (as it is still known) is a true jewel of our community. In the early 1960s, it was slightly past its prime. Movies were still being shown, and it was a legitimate venue for entertainment and dating, but Saturday mornings were a “fallow period,” with the projector shut down.

Someone got the brilliant idea to show old serialized movies, such as Tarzan, Flash Gordon and the like. Perfect for preteen kids.

The shows began early and extended until noon. Parents could drop us off and have a peaceful Saturday morning.

Royal Crown Cola is little known today, but along with Nehi, Chocolate Soldier and others, RC Cola was a direct competitor to the giants, Pepsi and Coke. One of the advantages of RC Cola was that it came in 10-ounce and then 16-ounce bottles. That may not seem like a lot in today’s world of “buckets of soda,” but Coke and Pepsi were sold only in 8-ounce bottles. In the South, “RC Cola and a MoonPie” was a classic snack treat.

Armed with our bottle caps and enough candies and other sugar treats to power a small city, we took our seats for the morning.

Now imagine this: a theater full of 8- to 10-year-olds, mostly boys (apparently girls had more useful outlets for their time and were easier to manage), barely supervised and cooped up for hours. At first, it was quiet, and we paid attention to Johnny Weissmuller communicating with Cheetah.

It would start with someone picking on someone else. Then the commotion would spread like wildfire, with the audience erupting into a real-time version of the monkeys on the screen. All at once, the manager — who had the combined duties of projectionist, counterman and babysitter — would shut down the projector and come onto the stage.

DeLand was a small place, and most folks knew each other, so the manager often knew the main instigators personally. He would point us out and threaten to call our mothers. In a lot of ways, this was a very effective threat. Calling your Dad was always iffy. You could get a whipping or just a knowing smile. Dads sometimes remember their own youth.

Moms were different. Physical punishment lasted only a little while. Disappoint your Mom? That was another ballgame.

I love the modern Athens. When I go now, the genres are usually very good and the audiences certainly more sedate, but when I look around, I can still see Bobby giving a headlock to Hugh, and Mikey crying because someone stuck gum in his hair.

You can now sit directly below the balcony seats without fear of something being poured on you. What you don’t see is a muscular Tarzan and (more importantly) scantily clad Jane swinging through the trees on the big screen.

For me, the history of the Athens can be summed up succinctly: something lost and something gained.

— Mancinik is a fifth-generation Floridian and a native of DeLand. He has been an active Realtor for more than 40 years. If you’d like to share your memories of West Volusia, email them to info@beacononlinenews.com, along with any relevant photos and a good way to contact you if we have any questions. Thank you!