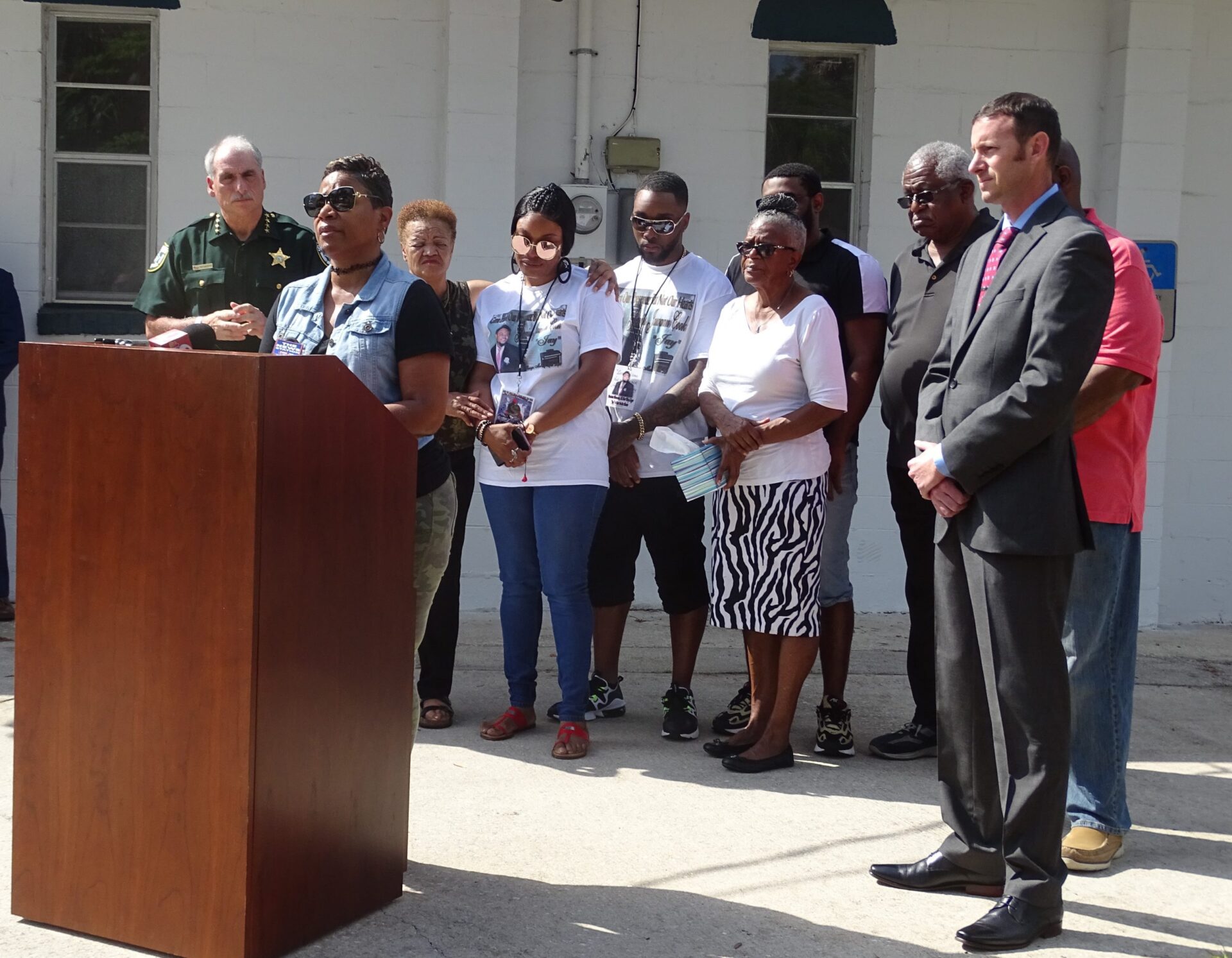 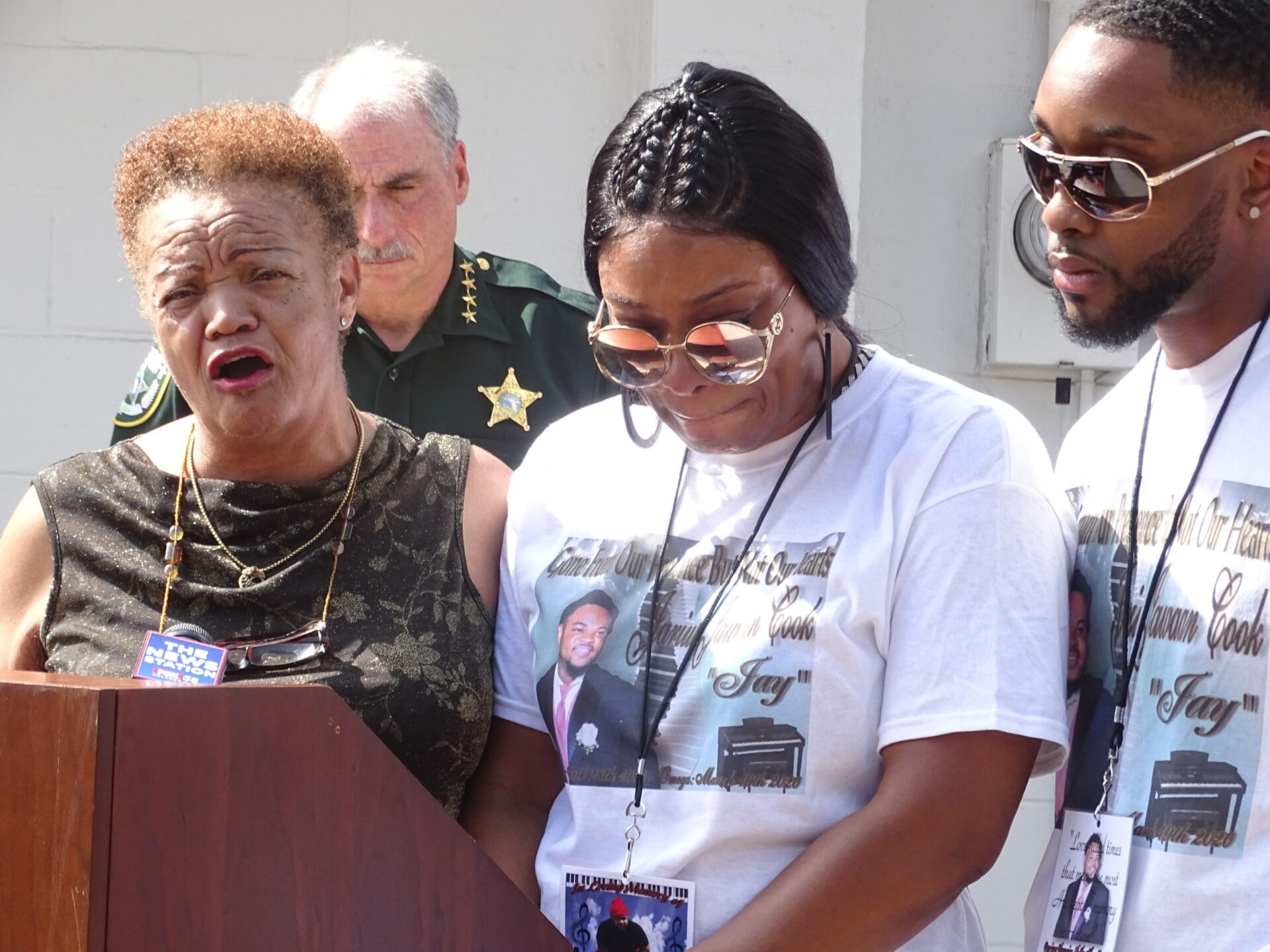 “I plead with the community: If you know anything, come forward. Give Jarius justice. Give us peace,” Stella McRae urged the community at a Sheriff’s Office press conference.

The father of McRae’s great-grandson, Jarius Cook, was found March 19 in a burning vehicle in the 900 block of South Delaware Avenue in the Spring Hill area of southwest DeLand. Investigators determined that twenty-one-year-old Cook was murdered.

At the press conference March 27, officials with the Volusia County Sheriff’s Office joined McRae and other members of Cook’s family to plead with community members to speak openly to investigators, in the hope someone can be found who will testify.

“This is a brutal, brutal crime, and we know that there are people out there in the community that know exactly what happened, and know exactly who is responsible for the death of this young man,” Sheriff Mike Chitwood said.

“Please. Jarius was a bright, 21-year-old with a future ahead of him. He was a musician for our community, and he was a good young man. So from my family, to the community, please say something about what happened with Jarius,” Cook’s aunt Vickie Cook Heath said.

“Talk to the Sheriff’s Office. They’re not out to hurt anybody. They’re out to do their job — and their job is to bring closure and bring justice for what has happened,” McRae said.

The Sheriff’s Office has received tips about the crime, but the third-party information they are getting may not ensure a conviction.

“At the end of the day, those who do submit tips, someone has to rise up and be accountable … and get some attribution for what they said. Because in the court of law someone has to come forth and testify,” Sgt. A.J. Pagliari explained.

“I would love to use the streets as a witness,” Pagliari added. “We’d probably solve 100 percent of cases if we could.”

Pagliari pointed to other unsolved cases in the Spring Hill area that remain active, still awaiting community members to come forward to help.

“We do know that there are other individuals who know about people who have been killed up here,” Pagliari said.

He listed the names of the dead in unsolved cases in Spring Hill: Paul Wright, Bryant Ball, Tyrell Barkley, and the 1979 case of Mary Reddick. All are cold cases, lacking witnesses and people to testify.

“We know about those, and they are always active. But it takes people in the community, again, to rise up, show some honor, courage, commitment, and do the right thing,” Pagliari said.

McRae, the great-grandmother of Cook’s son, spoke directly to those who are responsible.

The Sheriff’s Office, with the assistance of the Florida Sheriffs Association, has increased to $15,000 the reward for information leading to the arrest and conviction of those responsible for Cook’s death.

Contact Volusia County Sheriff’s Office’s Major Case Unit at 386-254-1537. Anonymous tips can be submitted through Crime Stoppers of Northeast Florida at 888-277-TIPS (8477) or through the mobile app found at www.NEFCrimestoppers.com.