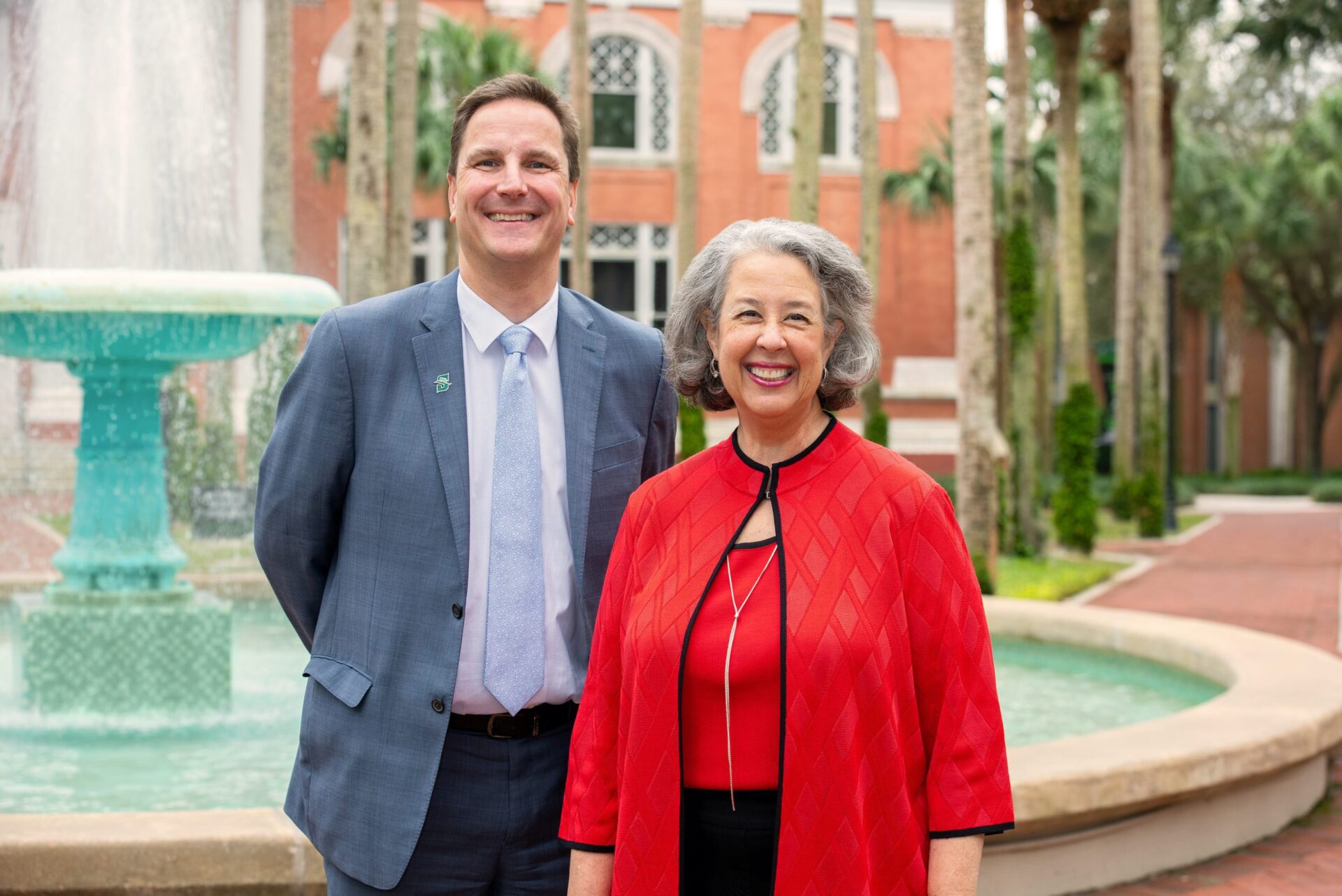 “If there’s a president out there that doesn’t put [COVID-19] at the top of their list, I’d like to talk to them about it, because I really think that’s A-number-1, that we’ve got to continue to navigate this pandemic with kindness, empathy and with the best education possible given the constraints we’re operating under,” President Christopher F. Roellke said.
Roellke also said he feels like the university has made “tremendous progress” in diversity and inclusion on campus.
“Given the social unrest in the country, I very much hope that, short-term, that Stetson can be a lighthouse of how it is that you have difficult conversations across differences, to move us forward collaboratively,” he said.
He said the university could be a model for how others could have difficult conversations involving diversity, inclusion and other sometimes-thorny issues.

When Christopher Roellke was chosen as the new president of Stetson University in November 2019, little did he know what exactly he’d be in for.

Roelke is a longtime veteran of higher education, but when he took reins from Wendy Libby on July 1, Roelke found himself facing the challenge of how to hold classes and other collegiate events in the midst of a once-in-a-century global pandemic.

Roelke is the 137-year-old university’s 10th president. He hails from the same city as benefactor John B. Stetson himself — Orange, New Jersey.

Before coming to DeLand, Roellke, 55, served as a faculty member and dean at Vassar College in Poughkeepsie, New York. He was dean from 2008 to 2018 before being named dean emeritus.

“I was engaged with Stetson in emergency planning on COVID-19 as early as February 2020, because they knew I was going to be the new president and it was an unprecedented time,” Roellke said. “I was involved with President Emeritus Wendy Libby and her senior team since mid-February in planning Stetson’s response to the pandemic.”

Fortunately, he said, the Stetson team has stepped up in a big way.

“I couldn’t be more proud of the way the Stetson community has responded,” he said. “Very early on in my presidency, in the first week of July, I asked our community to embrace three themes during these unprecedented times. One was kindness, the other was empathy, and the other was agency.”

For example, students who didn’t feel safe coming to campus, or faculty with compromising health conditions, could choose to receive and give instruction remotely or in a hybrid fashion.

“Many of them, much to our surprise, chose to be on campus and face-to-face,” Roellke said. “I think that that demonstrates how much our community values that face-to-face interaction.”

He said that raised the challenge of how to provide the best form of a Stetson education while still being attentive to an ongoing public-health crisis.

“We are a community that relies very heavily on intellectual intimacy [and] face-to-face interactions,” he said. “We believe as much learning goes on outside the classroom as inside the classroom, so being together in the dining hall and the dorm rooms is all part of the fabric of Stetson. So, that was an enormous challenge to try to overcome.”

The university also went to single-occupancy in its dorm rooms for health-and-safety reasons.

“It was inevitable that we were going to have some transmission of the virus on campus, and that enabled us to very safely and quickly isolate students who may have contracted the virus,” he said.

The university also established the “Safer Stetson” dashboard, which shows how many positive tests for the virus have occurred on campus, along with how many students are in isolation at any given time.

The dashboard can be viewed by anyone at www.bit.ly/sudashboard.

Roellke said Stetson had a “very much expected” spike when students first arrived on campus for the fall semester, despite the university requiring “gateway” testing for arriving students, as not all of the tests are completely accurate.

The numbers had since “flattened out a great deal,” until a post-Halloween spike that Roellke said correlates with Florida reopening businesses more fully.

“Again, not an unexpected spike, and not nearly as big a spike as what we had at the beginning of the academic year, but it’s one that we’re constantly monitoring,” he said.

“The students complied very, very quickly after the first spike,” he said. “I think they realize this is very serious stuff.”

The university is also planning to ramp its athletics program back up throughout the winter and spring. The college hasn’t been able to do intercollegiate competition this fall, leaving many Hatter fans in the community without sporting events to cheer.

Schedules for sports like basketball will be changed a bit to help teams limit travel.

“We are hoping to compete more fully in the spring, subject to public health,” Roellke said. “We will do so carefully, and with some creative safety measures.”

Roellke said that, in a strange way, he is grateful for coming to Stetson in the midst of a crisis like the COVID-19 pandemic, since it’s allowed him to “truly be immersed” in the entirety of the institution.

“You see some of the very best in people when you’re in the middle of a crisis,” he said. “People step up in interesting and important ways, and collaboration occurs at a much faster clip.”

One positive for the university has been that its fundraising has remained pretty steady, Roellke said, thanks in part to the university’s endowment and very loyal alumni.

Still, like most higher-education institutions this fall semester, Stetson experienced a dip in enrollment, causing about a $17 million budget deficit — about a 15-percent reduction in the overall budget.

Roellke said to balance the budget, the university kept salaries flat and trimmed some retirement benefits. He himself took a 15-percent pay cut.

Unrelated to the pandemic or the university’s financial situation, Roellke also came to Stetson in the wake of a couple of minor controversies, including a former baseball coach making inappropriate remarks about Vice President-elect Kamala Harris, and another employee posting a photo of themselves and their partner with Halloween costume many would consider inappropriate. Both were made public on social media.

Neither of the employees are currently with Stetson, Roellke said.

The events are perhaps best treated as a learning experience, he said, and a chance to reaffirm Stetson’s values of diversity and inclusion.

Those values also include speech that is “free, but also mindful,” he said.

Roellke also acknowledged that, as much as he’d like to think he could prevent social-media controversies in the future, “it is going to happen again.”

“Social media’s a bit of a beast, and things are going to be said there that are going to be difficult, and my answer, frankly, to challenges associated with offensive or non-inclusive commentary, one way to combat that is with more speech,” he said.

“All we need to do as an institution is to use them as teachable moments,” Roellke added.

Roellke said he wasn’t actively looking for a new position while at Vassar, and that he was contacted by a so-called headhunter, but that he quickly became enamored with Stetson and the DeLand community as he went through the hiring process.

“Stetson has a tremendous track record in experiential learning — that is, bridging any perceived or real gaps between theory and practice, with students applying what they learn in the classroom to real-world settings,” he said. “I love that about Stetson.”

The university’s NCAA Division I athletics program also attracted him.

“Frankly, it was also the right size,” he said. “Vassar is 2,400 students, and Stetson, including the law school and all of our graduate programs, is about 4,200 students, so it’s not dramatically larger than the institution I was helping to lead.”

Perhaps most of all, Stetson’s strong roots in the DeLand community were also attractive.

“I immediately became a lifetime member of the West Volusia Historical Society, because I’m deeply interested in local area history,” he said. “I immersed myself in all sorts of literature to understand the history of DeLand and also its relationship with Stetson.”

“Everything I read suggests that, since its founding in 1883, the relationship has been strong between Stetson and the DeLand and greater Volusia County community, so that’s great,” he added. “I really like [DeLand], I think it’s a nice-sized city. It’s got a lot of interesting and eclectic offerings on the business side.”

“I’m delighted to be a resident here,” Roellke said.