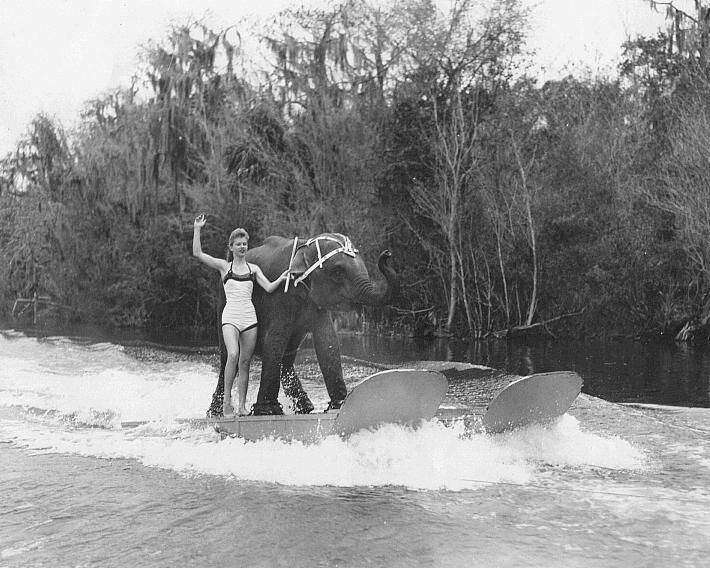 DeLeon Springs State Park is a quiet destination nowadays — the perfect place for a swim in the bracing-cold water and to chow down on some pancakes you cook on a grill in the middle of your table.

Sixty years ago, things were a lot different.

Sure, you could still go for a dip, and relax, but in the late 1950s, you could also see Queenie, one of the world’s very few water-skiing elephants making her way gracefully across the water.

Yes, you read that right — a water-skiing elephant, and with a human companion to boot.

Queenie’s human companion was Liz Dane, nee Green, who grew up alongside the Asian elephant her father had purchased from a New York pet store in 1953.

While Dane performed with Queenie at the DeLeon Springs park only for about three years in the late 1950s, the pair are an important part of the area’s history.

Dianne Hermanski, co-chair of Project Speak History — a DeLeon Springs Community Association project to catalog the area’s history from people who experienced it firsthand — explained the enduring legacy of Dane and her pachyderm partner.

“She is the iconic symbol of Florida’s roadside attractions,” Hermanski said. “Despite the very short time she was there, she and Queenie are no doubt the icons of this era.”

REUNITED AT LAST — After 38 years apart, Dane was finally able to see Queenie again in 2005 at Wild Adventures, the Valdosta, Georgia, theme park where Queenie took up residence after retiring from a job with a circus due to an injury. This photo is of Dane’s second reunion with Queenie in 2006, this time with her son and his family. Before Queenie’s death in 2011, Dane said, all of her children and grandchildren at the time were able to meet her childhood friend.

It all started in 1953, when Liz Dane — now 76 years old, and a Florida snowbird who spends most of the year in New Hampshire — was 9.

Her father, William Edgar Green, owned and operated an exotic-animals zoo in Vermont, and had purchased the 6-month-old baby elephant for the zoo’s collection.

Dane and the elephant were inseparable.

“We were best buds,” Dane said.

She compared her relationship to Queenie to that of a person and their dog.

“If you were having a sad day and hugging your dog, your dog would look at you knowing you were sad about something. Queenie would do the same thing,” Dane said. “She would get really close to me and run her trunk up my arm and give me a hug — give me a pat on the back, so to speak.”

After convincing her father to let her perform with Queenie, Dane began putting on shows with the elephant in the mid-1950s. In the winter of 1958, Dane began performing with Queenie in a water-skiing show, after the two of them were trained by Florida water skiers and DeLeon Springs regulars Jim and Marge Rusing.

Dane performed with Queenie at DeLeon Springs as well as other areas across the U.S., as well as internationally, including in Caracas, Venezuela.

Initially Dane lived and attended school in Callahan, Florida, She would make the trip on the weekends to DeLeon Springs to spend time and practice with her beloved elephant who was living at the Springs.

The show was a hit, but didn’t last forever; nor did DeLeon Springs’ status as a roadside attraction. After the then-privately-owned park shut down, it went through a tumultuous period where it was nearly bought up by developers, according to park ranger and local historian James Stone.

As for Dane and Queenie, their history didn’t end when the skis were put away.

Dane grew up and her life changed; she put her time as a performer behind her and got married. Dane told The Beacon she never actually water-skied by herself, only with Queenie.

When Dane’s father passed away, many of the animals in his zoo were sold to other zoos and circuses. Queenie ended up with a circus.

Eventually, the elephant retired after suffering an injury during a performance. Queenie was no longer able to perform, and Dane heard later that the elephant was nearly euthanized, but was saved by some passionate pachyderm fans.

Queenie began the last chapter of her life in the early 2000s at Wild Adventures, a theme park in Valdosta, Georgia. When Dane heard that her childhood best friend was in Georgia, she traveled to meet her again.

“I first saw Queenie in October 2005 after being apart for 38 years,” she said. “Her keepers at the time thought that was the best medicine Queenie could have had. She obviously remembered me, and was very happy to see me again.”

Queenie died in 2011, but not before Dane was able to see her several more times and introduce her to all of her children and grandchildren at the time.

“How I wish she was here today,” Dane said. “I miss an elephant hug.”

DELEON’S COLORFUL PAST — This map shows DeLeon Springs when the park was a privately owned roadside attraction with a “fountain of youth” (center), which, of course, is what we know as the springs swimming area. Park Ranger James Stone said that fizzled out in the 1960s, with the growing popularity of Walt Disney World some 60 miles south. Some of the material from our story about Liz Dane and her elephant companion Queenie was taken from Dane’s interview with Project Speak History, an initiative of the DeLeon Springs Community Association to preserve the springs’ history through interviews with people who remember it. Dianne Hermanski, co-chair of Project Speak History, said the project has been mostly put on hold until the COVID-19 pandemic is under control. She invited anyone with memories of DeLeon Springs to call her at 386-985-5363.