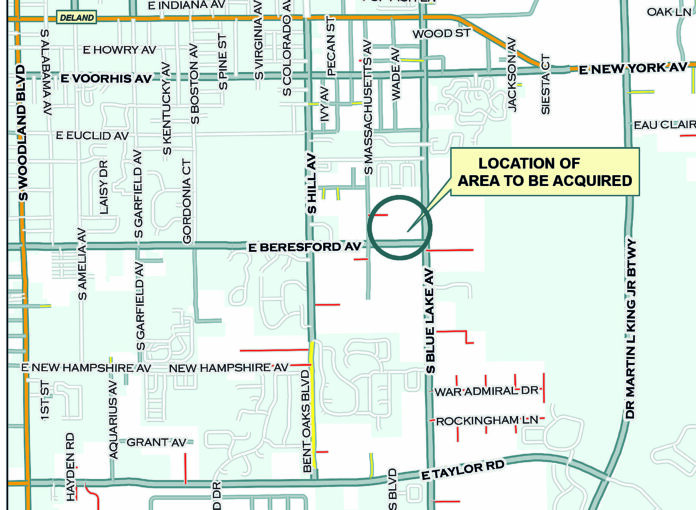 Volusia County has purchased the last piece of right of way needed to extend Beresford Avenue to relieve traffic congestion on the east side of DeLand.

For several years, Volusia County leaders and transportation planners have wanted to extend Beresford eastward from its current endpoint on South Blue Lake Avenue to the Martin Luther King Jr. Beltway, but couldn’t assemble the needed right of way.

That problem is solved, and progress toward building the road has now begun.

The County Council last month approved the purchase of 0.785 of an acre at the intersection of South Blue Lake and East Beresford avenues for $113,500. Kasbeer said the alignment of the extension will be “pushed north” at the intersection to avoid having to relocate a FGT gas line and a City of DeLand waterline.

When complete, the 1-mile segment eastward may give some motorists an alternative to driving through traffic chokepoints at the intersections of State Road 44 and Kepler Road, or South Blue Lake Avenue and Orange Camp Road, where there may be long wait times to make turns.

A divided two-lane road with a curbed grass median is planned, but sufficient right of way is being purchased to allow a four-lane road later.

Construction on the Beresford extension won’t start until the developer of The Reserve at Victoria, on the south side of the planned route, builds 1,400 feet of new road on the east end.

“The developer is required to build that as part of their third phase, which is anticipated to be complete no later than the end of 2023, though their schedule is currently expected to be much quicker than that,” Kasbeer said.

Design of the roadway will cost $400,000. Two engineering firms are sharing in the project. Zev Cohen & Associates is working for the county, and Newkirk Engineering is working for the developer of The Reserve at Victoria. Newkirk is also the engineer for the new neighborhood.

Having the developer as a partner in the project will save the county some money.

“The cost of construction of the entire extension is estimated at $3.4 million,” Kasbeer said.

Assuming the developer builds his share, the county’s cost will drop to $2.3 million, he said.

Realizing that growth trends in West Volusia are likely to continue, Kasbeer said the two-lane East Beresford Avenue Extension will be designed and constructed to allow for future widening.

“The right-of-way width is 100 feet,” Kasbeer said. “We anticipate at some point it will become a four-lane road.”