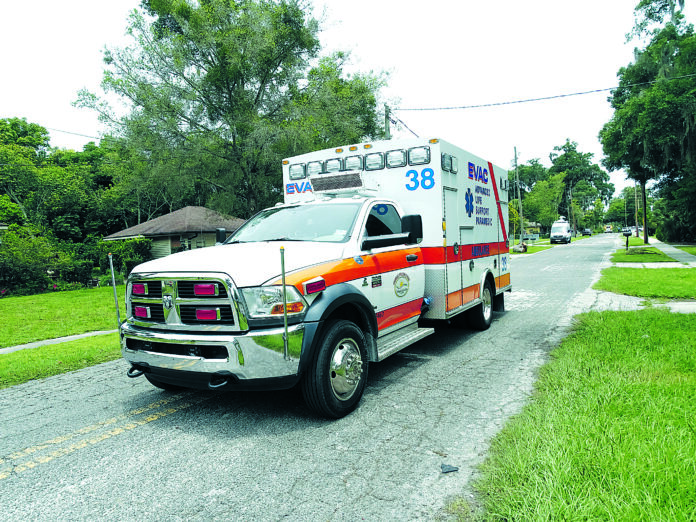 The term “Emergency Medical Services” means just that — an essential service staffed by highly trained professionals who respond in cases of serious illness or injury to provide acute care and transport between the scene of an incident and a trauma center or emergency department.

Like most of those we ask to go into harm’s way to protect our safety and security, the dedicated paramedics and emergency medical technicians who perform lifesaving measures under difficult and dangerous conditions serve for far less than they are worth.

They are subject to long hours and appallingly low pay in a profession that consistently ranks as one of the world’s most stressful.

Here in Volusia County, these brave professionals have long been pawns in a poorly managed and inefficient system that many practitioners have warned is placing the lives of residents in jeopardy — and driving paramedics and EMTs out of emergency services.

Inexplicably, for years, members of the Volusia County Council have been reluctant to even question senior administrators on the serious issues facing emergency medical transport, while ignoring alarms sounded by those on the front lines. They choose, instead, to accept the same protocols (and excuses) while expecting a different outcome.

In the meantime, Volusia County EMS continues to hemorrhage qualified employees. It’s an industrywide problem our powers that be have addressed (as always) by throwing money at it, offering recruitment and retention bonuses while refusing to change the culture.

Last year, Council Member Heather Post attempted to extract answers to persistent questions from the former Public Protection director and current County Manager George “The Wreck” Recktenwald, only to be lambasted by her “colleagues” and accused of “micromanagement” and conducting a “witch hunt.”

Her sin? Daring to look behind the velvet curtain of a cloistered system where those providing this vital service are expected to suffer in silence from the stifling confines of an ambulance cab.

Recently, the Volusia County Council held a much-needed workshop to discuss EMS service delivery and working conditions in an atmosphere where, as of March 1, the average Volusia County paramedic has worked 362 hours of overtime over the past year, with EMTs racking up 256 overtime hours.

As someone who was once responsible for the recruitment, retention and scheduling of emergency-service personnel, I can tell you those hours are unsustainable and, more important, detrimental to the mental and physical health of those forced to work them.

During the workshop, Jason Lademann, president of the International Association of EMTs and Paramedics Local 77, explained that the most pressing issue facing emergency medical personnel is the lack of dedicated facilities where working paramedics and EMTs can write reports, decontaminate, resupply, or simply eat a meal outside the fishbowl.

“Although the overtime-demands issue is a close second place, the overtime demands are a reflection of retention,” Lademann said.

Providing stations where EMS personnel can work and rest is No. 1, he emphasized.

Due to Volusia County’s “dynamic deployment” model, wherein ambulances respond from different locations throughout the county instead of returning to stations to await calls, EMS personnel are forced to disinfect themselves of blood, mud, urine, feces and other potential pathogens in public restrooms, where crews have been exposed to dirty hypodermic needles from illicit drug use and other unsanitary conditions — a recurring situation that demands purpose-built EMS stations at strategic locations.

I have always felt that forcing EMS personnel to spend hours upon end responding to emergencies while operating exclusively from the close-quarters of their ambulances — with no place to call home — was detrimental to the physiological and psychological needs of those asked to perform critical procedures in high-stress situations.

Only recently did Volusia County implement a system of “respite locations” that amounts to an unofficial understanding with area fire departments that requires paramedics and EMTs to knock on firehouse doors like Dickensian orphans seeking refuge, because they are not issued access cards or codes.

It appears efficient emergency medical services is yet another victim of this “cart before the horse” growth-at-all-cost strategy, where the proliferation of new wood-frame cracker boxes is outpacing government’s ability to provide essential services to the people in those houses — with absolutely no relief in sight from those compromised politicians who rubberstamp new development as an involuntary reflex.

— Barker writes a blog, usually about local government, at barkersview.org. A retired police chief, Barker says he lives as a semi-recluse in an arrogantly shabby home in coastal Central Florida, with his wife and two dogs. This is excerpted from his blog, lightly edited (he swears a lot) and reprinted with his permission.