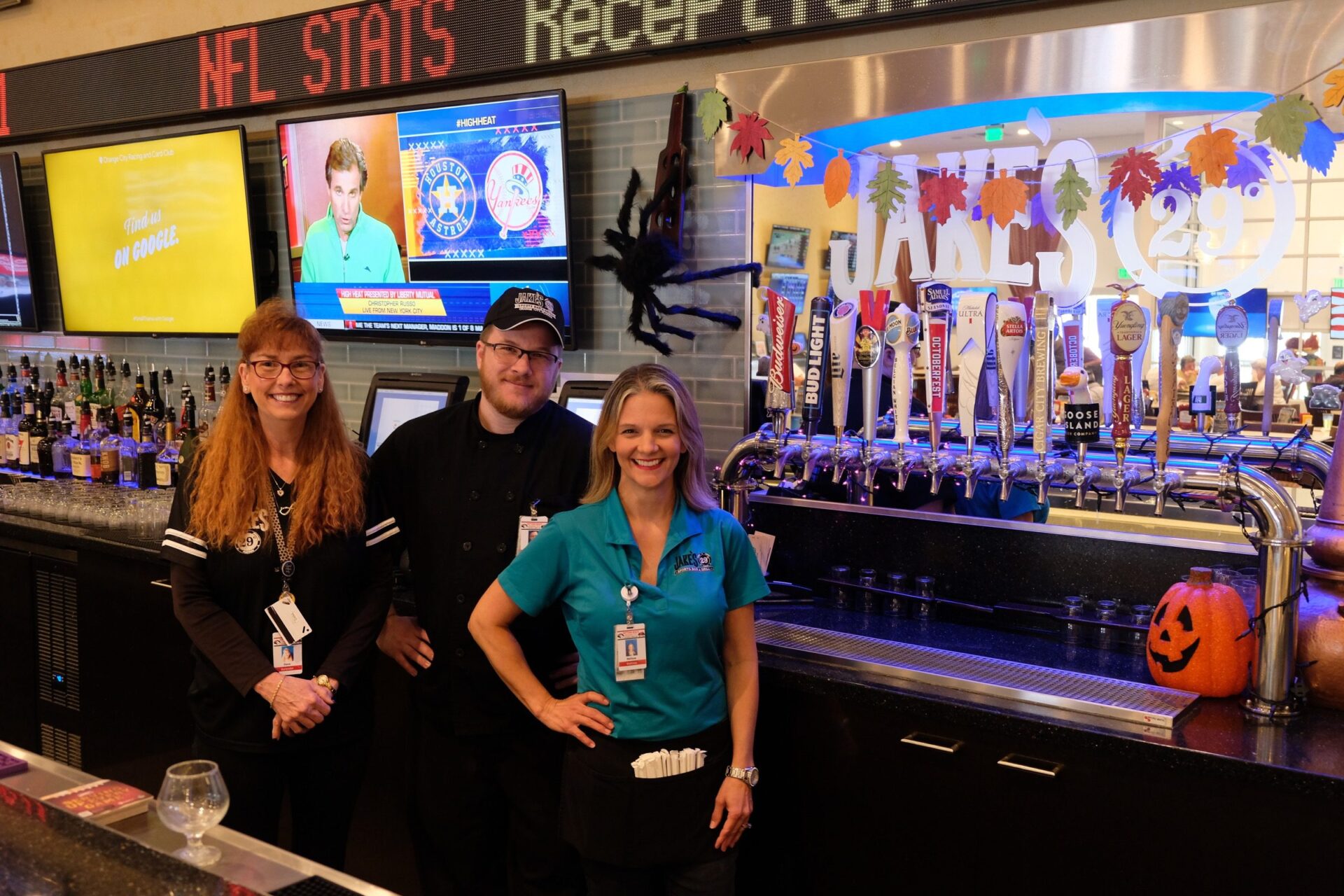 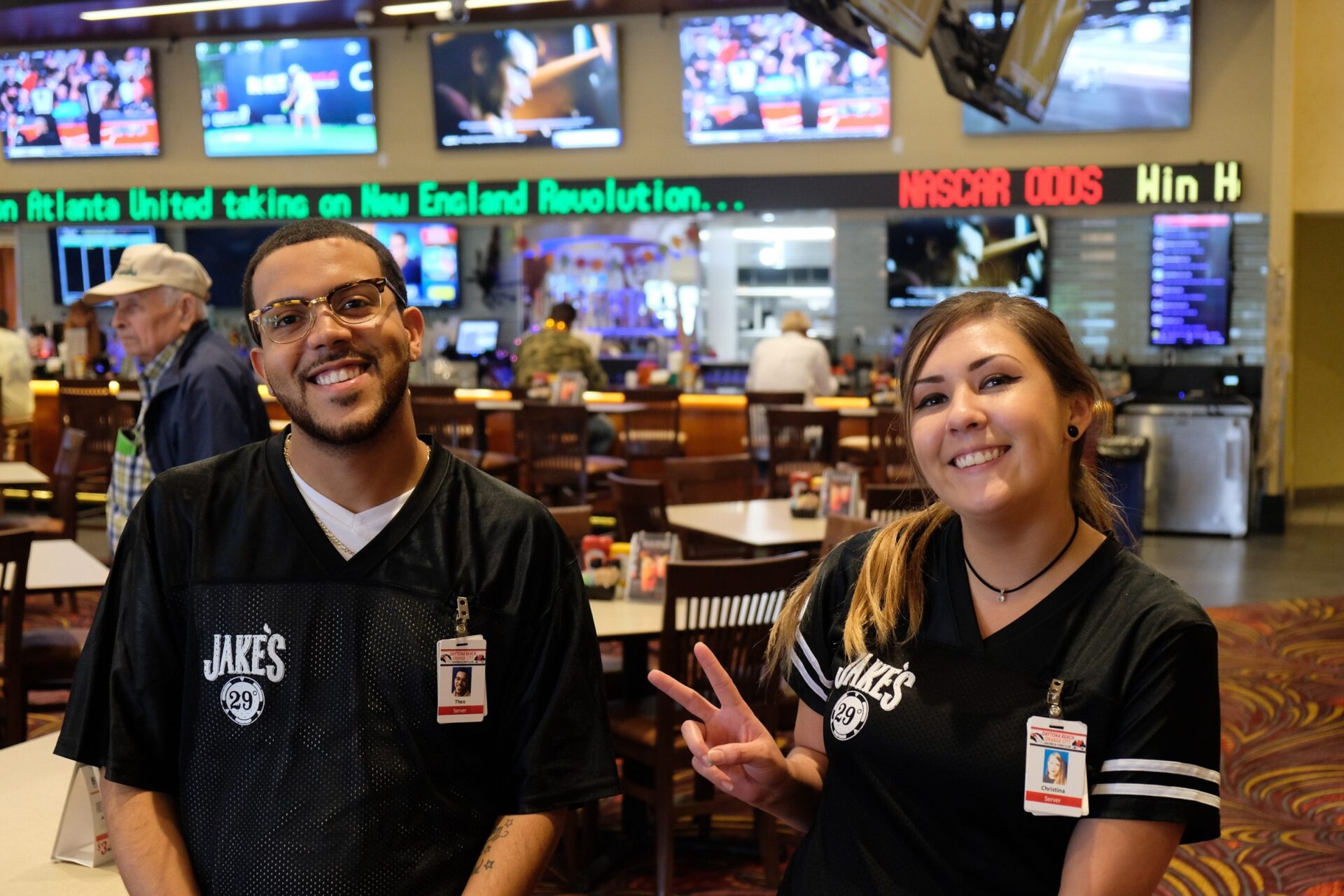 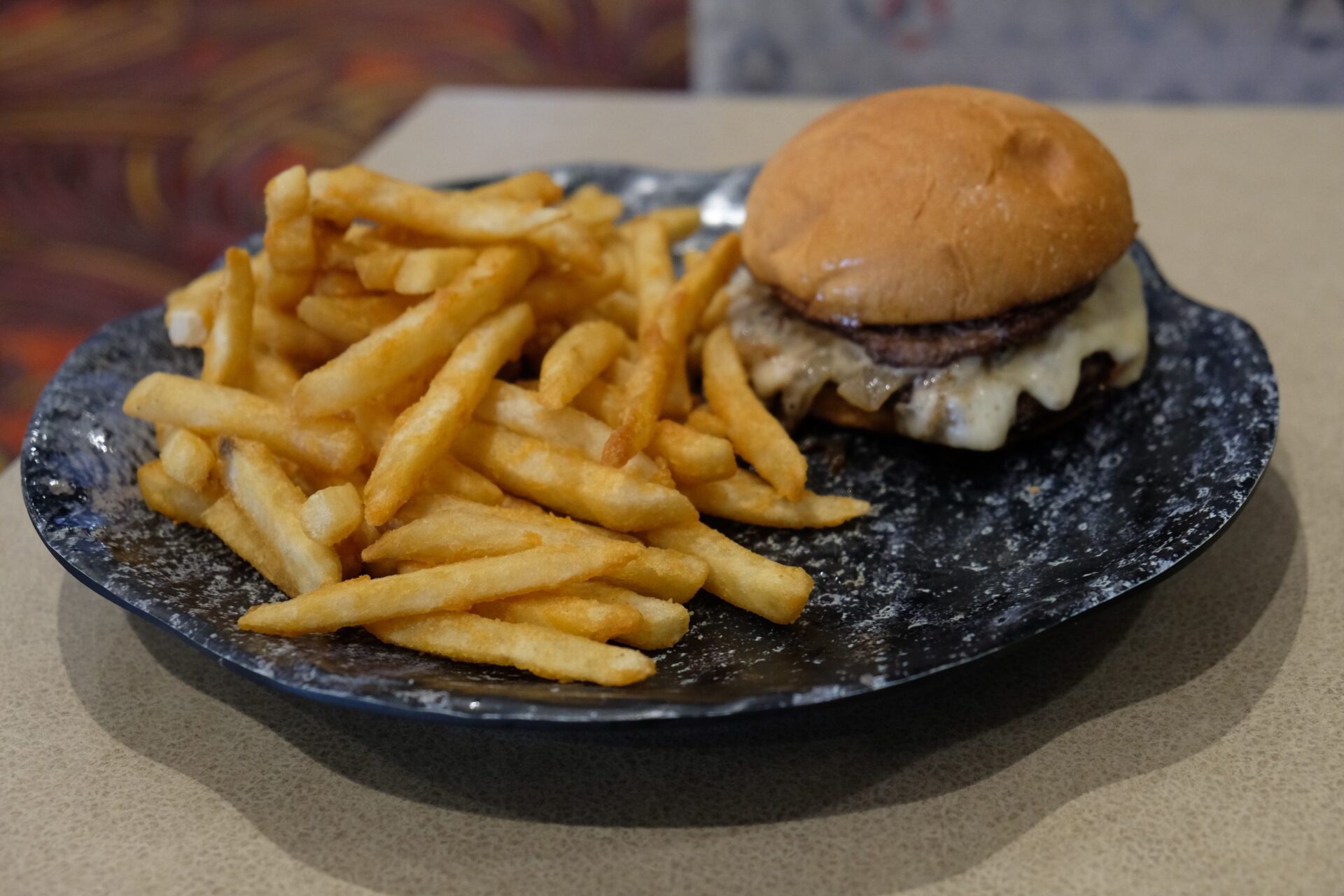 When I attended the Deltona Bacon & Brew Fest a couple of weeks ago, I had more than my fair share of bacon and brews.

One bacon vendor in particular, Jake’s 29° Sports Bar and Grill, stood out to me. They were there selling slices of their signature Mason jar bacon on a stick.

It was there that I met Mark Martino, the marketing manager at the Orange City Racing & Card Club, along with Chef Steven Thomure. After talking to them, I decided I’d stop by and check out Jake’s location in Orange City for myself and see what else they offered.

Now, I’m in the group that still remembers when there was a movie theater at the location where Jake’s 29° Sports Bar and Grill and the Orange City Racing & Card Club are now.

What used to be the lobby of the movie theater is now an open area with plenty of tables. Against one wall are large booths, each with its own television.

In fact, there are more than 40 televisions in the room. This, no doubt, helps on busy Friday nights, when people want to choose what game they want to watch.

IN ALL ITS GLORY — Jake’s 29° Sports Bar and Grill occupies the former space of a movie theater that existed in the Orange City Marketplace on the corner of Saxon Boulevard and Enterprise Road.

If you’re wondering why there’s a 29° attached to Jake’s 29°, it’s the temperature at which they serve most of their beers on tap. With the freezing temperature of water at 32° F, you can get a beer that’s colder than an ice cube.

“We serve it at 29 degrees so the beer stays colder longer,” said Mark.

Jake’s is a sports-bar-meets-gastropub with food options you’d expect from both.

While the menu has plenty of burgers and wings, other options, such as the Bangin’ Shrimp 29° and Grilled Chicken Bowl, are good substitutes for the typical burger-and-fries.

If you’re not happy with current menu options, you can check back in a couple of months.

“I’m trying to revise the menu every quarter,” said Chef Steven. “We want to have food you can’t get anywhere else.”

The chef has a diverse culinary background.

“I was a chef at Antojitos Authentic Mexican Food in Universal CityWalk, as well as at the Seafire Grill in SeaWorld, where I also was part of the opening team at Voyager’s Smokehouse as well,” Chef Steven said.

“We try and stand out a little bit more than them, so whereas while the one in Daytona is more of the traditional crowd pleaser, we want to be the one you go to when you want something different.”

As is tradition for me when visiting sports bars like Jake’s, I walked in knowing I wanted an order of their wings, which Jake’s brines in buttermilk.

“Brining it basically changes the water content of the wings,” said Chef Steven. “We soak the wings in buttermilk, brown sugar, and salt for about 10 minutes, and it helps the wings retain moisture as they’re cooking, making them crunchy on the outside and juicy on the inside.”

“As far as I know, we’re the only place in the area that does that,” he added.

THE BRINIEST WINGS AROUND — Jake’s soaks their wings in buttermilk, brown sugar, and salt for about 10 minutes, which helps make them crunchy on the outside and juicy on the inside. On the left are the Buffalo wings, and on the right are the maple bourbon wings.” width=”696″ height=”464″ />

THE BRINIEST WINGS AROUND — Jake’s soaks their wings in buttermilk, brown sugar, and salt for about 10 minutes, which helps make them crunchy on the outside and juicy on the inside. On the left are the Buffalo wings, and on the right are the maple bourbon wings.

These wings were good — and I’m not just saying that. I really think they were the best I’ve ever had.

I went with two different flavors: half Buffalo and half maple bourbon. The maple bourbon sauce was sweet, while the Buffalo was a medium on the scale of hotness.

I also decided to try one of their signature dishes: the Jake’s “All-In.” This burger, which has two 4-ounce short-rib brisket patties with American cheese, beer caramelized onions and their special OC (for Orange City) dressing served inside a split roll.

The burger was well-put-together, and it didn’t fall apart when I picked it up.

My loyal guest ordered the Bangin’ Shrimp Bowl, which had shrimp in a sweet chili peanut glaze, served with green onions on a bed of rice. The shrimp was extremely tasty, although our waitress warned that it was spicy.

My guest considers herself to be sensitive when it comes to overly spicy dishes, but this dish had very little impact on her taste buds.

THIS SHRIMP WAS BANGIN’ — The Bangin’ Shrimp Bowl has shrimp tossed in a sweet chili peanut glaze, served on top of rice and green onions.” width=”696″ height=”464″ />

THIS SHRIMP WAS BANGIN’ — The Bangin’ Shrimp Bowl has shrimp tossed in a sweet chili peanut glaze, served on top of rice and green onions.

I also thought that the shrimp was good, but I agreed when my guest told me that the rice wasn’t as good as its pairing.

While I didn’t get to try the signature drink, Tito & Jake’s Ultimate Bloody Mary, it certainly sounds good based on the menu description. Made with Tito’s Handmade Vodka, tomato juice, Worcestershire sauce, hot sauce, horseradish, a squeeze of lime juice and more of that delicious candied pepper bacon, you might want to give it a try if you’re thirsty at their bar.

Although the restaurant is only steps away from the poker and card room, Mark wanted to reassure me that people can visit Jake’s without getting involved with that sort of stuff.

“We want people to know that this is geared toward families,” said Mark. “The hardest part is getting people in the door.”

I was genuinely surprised by Jake’s and its friendly atmosphere that really didn’t seem synonymous with my preconceived notion of a gambling establishment.

There are no traces of the card room itself until you walk past the bar, and even then, they keep that part of the building locked down tight.

If you’re looking to have a nice family night out, then add Jake’s to your list!

The food is top-notch, and you’ll likely be as pleasantly surprised as I was.